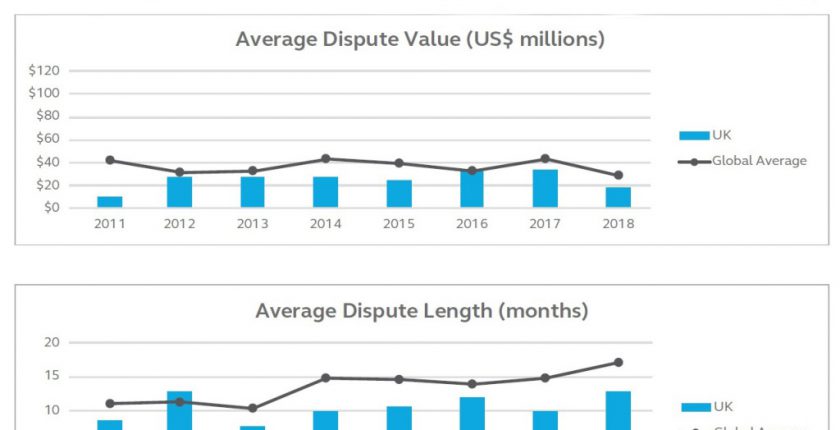 Construction disputes at all time low, are we getting better?

The value of construction disputes in the UK averaged just US$17.9m in 2018; well below the global average of US$33m and marking a significant decrease over the last six years.

So are we getting on better at resolving construction issues around money, or just arguing over smaller things?

The findings are revealed in the latest Arcadis Global Construction Disputes Report 2019: Laying the Foundation for Success. The report provides insight into the causes, duration and value of construction disputes, while highlighting the best ways to avoid, mitigate and resolve them.

According to the report, the UK also remained the jurisdiction with the shortest average length of time to solve a dispute – 12.8 months. However, this is up 28% on last year and consistent with the global trend, whereby disputes are taking longer on average to resolve.

Arcadis finds that a primary cause of disputes is often failing to administer the contract correctly. Projects are ultimately at risk of failing when uncertainty and expectations are inadequately managed.

Most disputes in the UK are resolved after they have crystallised, rather than parties seeking to avoid or mitigate potential dispute situations as they arise. Negotiation remains the preferred method of resolution but research respondents said that the number one factor that could have the biggest impact in avoiding disputes at all would be ‘a willingness to compromise in the dispute’.

Gary Kitt, head of UK contract solutions at Arcadis, said: “In some cases, it could be argued construction contracts are simply too complex for administrators to understand, and better training for everyone involved would go some way towards avoiding disputes as they arise. However, our results show the UK to be a world leader in effective avoidance and mitigation strategies, and as we continue to transition towards greater use of digital technologies like BIM and 4-, 5- or 6D modelling, we are likely to see an improvement in risk allocation much earlier on in the process. This could help all parties to collaboratively resolve any difficulties before cost and time pressures start to escalate.”

Adrian Bell, partner at law firm CMS Cameron McKenna Nabarro Olswang LLP, writes in the report: “It is unsurprising that the average value of construction disputes has decreased, as we see a move away from having large final account disputes at the end of a project. Parties are now generally preferring to try to resolve disputes as they arise contemporaneously during a project and/or to split disputes into more manageable bite sized chunks. It is not a sign, unfortunately, that the UK construction industry is becoming any less contentious.

“The drive to resolve disputes earlier is being supported by the drafters of the standard form contracts. Many of these contracts now contain elaborate provisions to ensure the early notification of claims and regimes that facilitate early discussion of them between the contracting parties. They also support rapid recourse to a third party neutral if their intervention is required. It is likely to be for this reason that the Arcadis report sees a reduction in the use of adjudications and an increase in negotiation as the preferred method of dispute resolution.

“As the report shows, however, this does mean that when claims cannot be resolved at an early stage, they end up being disputes that often then take longer to resolve. Parties become more entrenched and want to see a return on the investment that they have made in the proceedings. Given that many of the new editions of the standard form contracts are now considerably longer than their predecessors, it is concerning – but not surprising – that the report shows that a ‘failure to properly administer the contract’ remains the primary cause of disputes. With margins continuing to be squeezed, and a perception that many tenders are still decided on the lowest price basis, it is difficult to see how this cause will be eradicated any time soon.

“While the fact that the report shows that the UK is one of the leading jurisdictions for dispute resolution should be applauded, there is still clearly work to be done. There

is scope for quicker, cheaper and more bespoke forms of dispute resolution, supported by more collaborative behaviour, fairer risk sharing and a better understanding of how contracts are intended to be operated.”