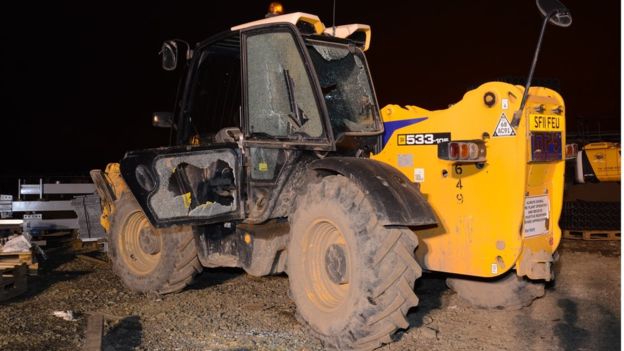 A spate of mass vandalism to excavators and other machines and buildings has been reported at the new Edinburgh Gateway railway station.The damage by the vandals is estimated to be around £60,000.

British Transport Police are appealing for witnesses after the rampage on Saturday night.

Inspector Lindsay Clarkson said: “The station was broken into last night and extensive damage was caused to vehicles, machinery and the buildings in the station. Windows were also smashed and graffiti daubed all over.

“It is nothing more than selfish vandalism that makes people fearful of their surroundings and costs the railway industry thousands of pounds to clean up.

“Unfortunately the costs associated with the clear up and fixing the damage caused is ultimately covered by the fare-paying passenger, which is not acceptable

“I am certain that someone out there may know something that would help us catch the person or people responsible, and I would very much like to hear from them.

“Any information provided will be treated in the strictest of confidence.”