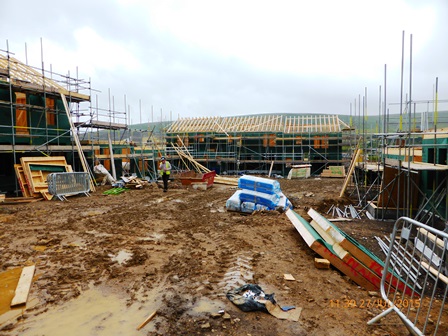 J G Hale Construction Ltd based in South Wales has been fined £100,000 for running an unsafe timber-frame construction site.

Cwmbran Magistrates’ Court heard that HSE launched an investigation on 27 July after making an unannounced visit to inspect Hale’s site in the centre of Blaenavon.

Fifty-four timber-frame houses were under construction, which carry a serious fire risk if not planned or managed properly, as the structures are made from wood. If a fire starts, the speed and intensity of fire spread can be extreme – putting workers and even members of the public at risk of harm.

HSE found that measures to prevent a fire starting and getting out of control had not been properly taken. All the houses were under construction at broadly the same stage with little fire protection, a lack of site management control, insufficient means to detect a fire and raise the alarm, poor control of ignition sources and a general lack of emergency planning. Workers were also at risk of being struck or crushed by construction vehicles on site.

Improvement Notices were served regarding fire and vehicle safety issues and these were complied with after two further inspection visits.

J G Hale Construction Limited, of Milland Road, Neath, South Wales, who also manufacture timber frames for the construction industry, pleaded guilty to breaching Regulations 27 and 29 of the Construction (Design and Management) Regulations 2015, and was fined £40,000 and £60,000 respectively. They were ordered to pay full prosecution costs of £4633.76 and a statutory surcharge of £120.

After the hearing, HSE inspector Liam Osborne said: “Hale Construction had been given plenty of warnings about fire-safety and traffic risks in the recent past, including from HSE.

“Timber-frame houses are perfectly safe once they’re finished and protected, but when under construction they can be very dangerous. Stringent fire-safety standards need to be in place well before the build starts, and then maintained and monitored”.