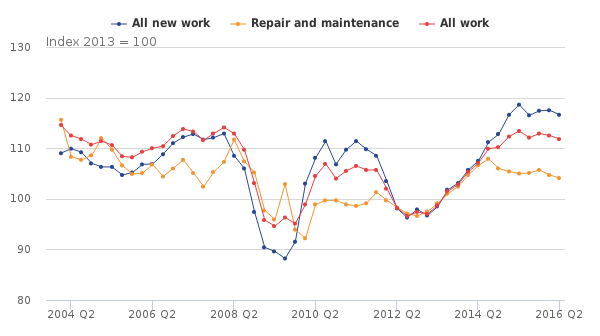 The construction sector has officially slipped into recession for the first time in four years according to the ONS the data shows in Quarter 2 (Apr to June) 2016, output in the construction industry was estimated to have decreased by 0.7% compared with Quarter 1 (Jan to Mar) 2016.

Commenting on the latest news from the sector, Samuel Tombs, the chief UK economist at Pantheon Macroeconomics said: “June’s official data confirm that the construction sector re-entered recession in the first half of this year, as public sector cuts and Brexit risk took their toll.”

“The downturn looks set to deepen in the third quarter. July’s construction PMI broadly is consistent with output falling by about 3.5% quarter-on-quarter. Meanwhile, Brexit negotiations will be protracted, so businesses will hold off committing to major capital expenditure for a long time to come.”

When the ONS published figures last month showing a relatively strong GDP growth of 0.6% in the second quarter, it had estimated a more modest fall in construction output of 0.4%. The higher figure of 0.7% will, however, have no discernible impact on the GDP figures given that construction only accounts for about 6% of the UK economy.

The preliminary estimate of gross domestic product (GDP) for Quarter 2 (Apr to June) 2016, published on 27 July 2016, contained a forecast for construction output of a fall of 0.4%. This estimate has been revised downwards by 0.3 percentage points within this release based upon further survey responses; output is now estimated to have decreased by 0.7%. This downward revision to construction output has no impact to 1 decimal place on GDP growth.

The release for June 2016 has a revision period back to April 2016. Revisions in this release were caused by the incorporation of late data. More information on revisions can be found in the background notes.

Output is defined as the amount charged by construction companies to customers for the value of work (produced during the reporting period) excluding Value Added Tax (VAT) and payments to sub-contractors.

Construction output estimates are a short-term indicator of construction output by the private sector and public corporations within Great Britain and are produced from a monthly survey of 8,000 businesses in Great Britain. The estimates are produced and published at current prices (including inflationary price effects) and at chained volume estimates (with inflationary effects removed) both seasonally adjusted and non-seasonally adjusted.

Chained volume measures are also described as volume. Construction output is used in the compilation of the output approach to measuring gross domestic product (GDP). Unless otherwise stated, all data referred to are volume estimates which are seasonally adjusted.

Detailed estimates, along with a longer run of time series data, are available to download in the Output in the Construction Industry: June 2016 datasets. In these tables, you will find chained volume estimates back to Quarter 1 (Jan to Mar) 1997, and monthly estimates back to January 2010. Current price non-seasonally adjusted data are available back to Quarter 1 1955. More information on these statistics can be found in the Definitions and explanations article.

Hs2 hits milestone as TBM’s get to work

Hs2 has hit a massive milestone with the two TBM's Florence and Cecilia to start boring through the chiltern hills.

In a shock move British Steel has stopped taking new orders, the stop on new orders for production is being blamed

New price hikes for structural steel to £800 per tonne