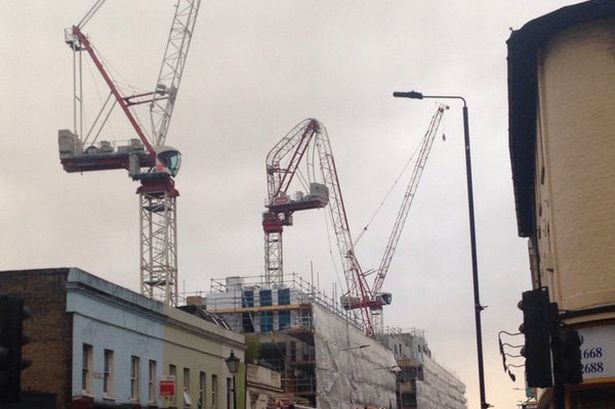 Eyewitness have reported a crane bent in half in Greenwich in London and have posted pictures on social media with pictures from @rolfey180 on Twittter who said “Can’t believe what I’ve just seen in Greenwich. Crane bent double by the wind! Unreal”

Police later tweeted that the road had been closed in both directions because of the damaged crane with motorists and pedestrians told to avoid the area.

Stome Katie has battered the UK with strong gales ranging from 50 to 100mph bringing a miserable end to the Easter bank holiday weekend.

Flights arriving at all major airports have been disrupted and some have had to be diverted to due to high winds and some major roads were closed overnight because of the stormy conditions.

Gusts of 103mph battered Needles, off the coast of the Isle of Wight, in the early hours of this morning as winds continue to push northeastwards and onto the North sea throughout the day.

Other parts of the country saw winds of more than 70mph, including the Isle of Portland, Berry Head,South West and Thorney Island.