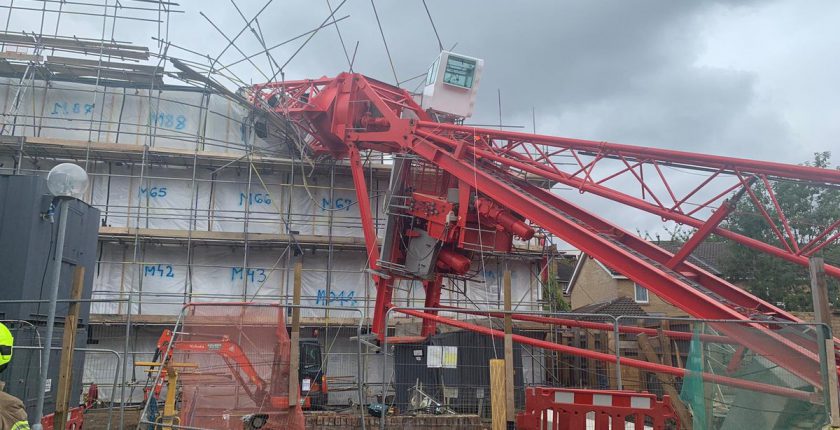 Crane collapse in east London killed woman in nearby home

A huge Wolff luffing crane has collapsed at a 62-flat housing site in Bow is understood to have toppled over backwards in a bizarre turn of events and left one woman dead who has not yet been named.

The jib of the crane collapsed  on to the roof of two nearby terraced homes while the tower came down on the under-construction scheme.

The dead woman was found on the first floor of one of the houses.

Firefighters arrived at the scene and spent several hours freeing people trapped inside the damaged house.

Eyewitnesses said the crane driver had been rescued.

Crane behind my building just collapsed in Bow, London. At least one man crushed, crane went through 2 house. pic.twitter.com/pOBF4LcZmc

“Our Urban Search and Rescue crews undertook a complex rescue operation and used specialist equipment to search the properties.

“Sadly one woman died at the scene. The London Ambulance Service have confirmed that two people were taken to hospital with head injuries and a further two were treated at the scene.”

The crane was operating on a major housing provider Swan Housing Association site for NU Living.

A spokeswoman for the housing association said: “Swan Housing Association /NU living is deeply saddened by an incident that has occurred at our Watts Grove development site this afternoon.

“Our thoughts are with those affected and their families at this difficult time.

“We would like to thank the emergency services for their swift and dedicated response and those who are supporting residents who have had to leave their homes as a safety precaution.

“Our staff are on site to provide support to the emergency response and the investigation.”

Unite national officer for construction Jerry Swain said: “There must be an urgent, full and complete investigation into the circumstances that led to this accident.

“The preliminary findings of which must be released in weeks, rather months or years, in order to ensure that similar accidents are avoided in the future.”