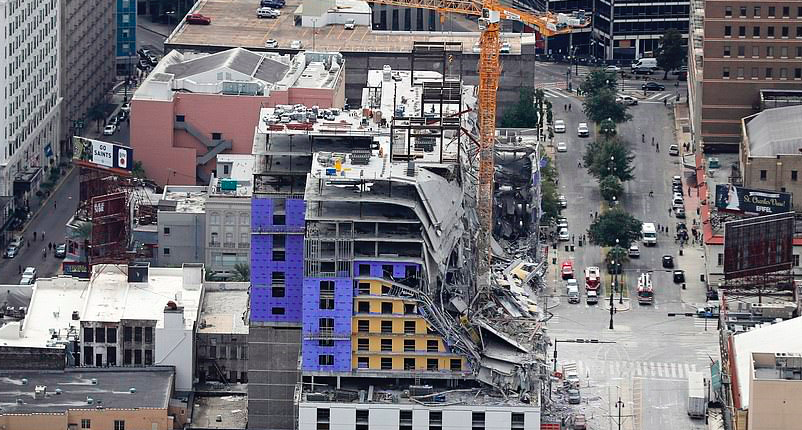 The shocking collapse of the under construction Hard Rock hotel in New Orleans has seen two dead and one missing after a crane and large part of the building crashed onto the street below.

An eye witness said ‘I’m not sure what happened, but they told us to get out of here,’ said Michael Arbeiter, 30, from Munich, Germany, a hostel guest who said he was just getting out of the shower when his room shook. ‘Thank God it was not another 9/11.’

Officials said 18 people were taken to the hospital and several others went to the hospital on their own. They said none of their injuries was believed to be life threatening.

‘There is a very strong possibility of further collapse of this crane right now,’ McConnell said.

The contractor Citadel Builders LLC commented saying that; “more than 100 workers were on site at the time of the collapse”. An email from spokesman Brian Trascher said company officials were working with emergency workers on a plan to stabilise the building.

The Governor of Louisiana, John Bel Edwards visited the site and took part in news briefings shortly after the collapse. T

The new Hard Rock Hotel was under construction at the corner of Rampart Street and Canal Street, a broad boulevard just outside the Quarter that is lined with restaurants hotels and retailers.

Canal, which carries six lanes off traffic divided by a wide median where streetcars roll, separates the Quarter from the city’s main business district.

Images from WWL.tv and AP