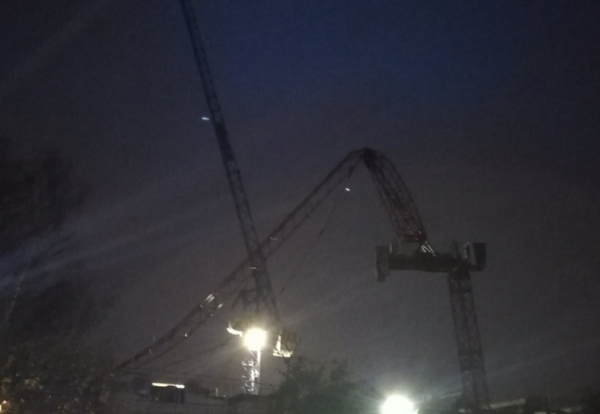 Emergency services were called to the residential construction site in Kingston late on Tuesday afternoon but there were no reports of injuries.

A tower crane has collapsed near the roof of construction site as severe weather hits the UK. The collapsed crane, on a building site on Fassett Road, is not thought to have caused any injuries – but at this point, it is not clear whether the fall is related to the weather.

It is understood work had finished for the day at the James Taylor Homes site when the luffing jib snapped in high winds.

Residents close to the scene where evacuated from their homes as a precaution.

There have been no reported injuries, and a spokesperson from the London Fire Brigade confirmed they are in attendance.

A representative said:‘We were called at 16.15 to reports of a tower crane collapsing into a building under construction on Beaufort Road. ‘Two fire engines and two fire rescue units attended. Still ongoing.’ Kingston University said the collapse had taken place on a private site, not at one of its buildings. A spokesman for the Metropolitan Police said: ‘Emergency services on the scene. At this early stage, there are no reported injuries. A number of local residents have been evacuated as a precaution.’