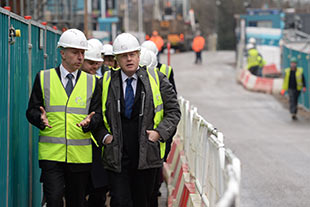 Plans have been unveiled for a multibillion-pound construction project to build two tunnels across London.

At least part of the funding would be raised through road tolls, with estimates suggesting the scheme stands to cut congestion in the capital by up to 20%.

It forms part of a strategy aimed at helping London’s infrastructure cope with its booming population, which is set to hit 10 million by 2030.

The first tunnel, which could be operational by the mid to late 2030s, would run from the A40 in west London.

Known as the Northern Cross City Corridor, this tunnel would finish at Hackney Wick in east London. It would cost £15 billion to build.

A second tunnel, for which no cost estimates have yet been drawn up, would run from Chiswick in the west to Beckton in the east.

Similar schemes are already up and running in other major cities including Stockholm and Boston, which transport bosses have had chance to examine.

Unless action is taken to improve London’s traffic flow, congestion in the capital could shoot up 60% by 2030.

Alternative proposals are also up for consideration, and include plans for an orbital tunnel. Sites for a number of smaller tunnels and so-called fly-unders have also been identified across the capital.

Unveiling the plans, London Mayor Boris Johnson said the tunnels would represent a significant improvement to the city’s infrastructure.

“London is booming and, as our great capital thrives, our ambitions for the veins and arteries that keep our city alive must grow with it,” he said.

“We must deliver long-term solutions that will not just make the most of the space we have for road users, but bring environmental and amenity improvements to local areas.

“By pushing forward strategic initiatives we are outlining today, we will lay the foundation for the next wave of improvements to everyone’s experience of the road network across the city.”