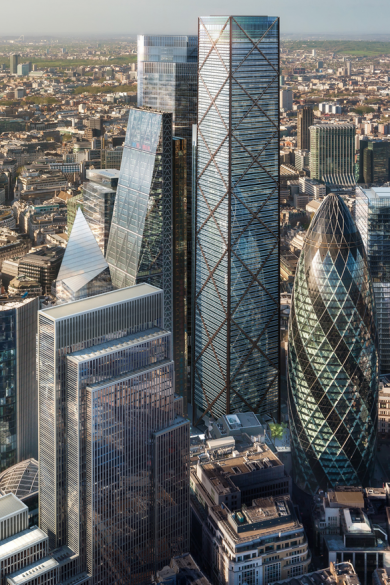 New plans have been launched to demolish the old headquarters of insurance giant Aviva in London to make way for what would be the city’s tallest tower 1 Undershaft.

The newly proposed 73-storey skyscraper at 1 Undershaft will rise to 309.6m putting it level with the Shard’s tallest steelwork point in London Bridge.

The developers  Aroland Holdings who are Singapore-based, have commissioned architect Eric Parry to work on a design for the site with view to submitting planning early next year the concept drawing is seen below.

Parry said the public elements of the building will mean it is in use seven days a week.

He commented saying: “1 Undershaft will create more of the quality office space that is desperately needed in the capital and will reconnect the city’s tall building cluster with the public.”

“This building will set new standards for the City in terms of comfort, quality, environmental sustainability and putting the public at the heart of the tower.”

The building would be able to accommodate 10,000 people and boast a viewing platform higher than that of the Shard, and London’s highest public sky restaurant and has a total area of 90,000 sq m.

It would stand 28m higher than the replacement tower for the Pinnacle scheme at 22 Bishopsgate, recently given the green light by planners.

The new design is for a more conventional office tower block with distinctive visible structural cross bracing as seen below.

A conceptual design by Avery Associates for the previous owner of the 1 Undershaft site proposed an angular sloping sided glass tower peaking at 270m and prompted one contractor to dub the building “The Fang”.