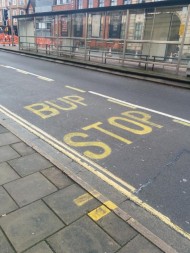 The mistake which was made over the weekend by Bristol City Council workers used the stencilled letter P instead of an S leaving “Bup Stop” emblazoned across the road in large yellow letters in Bristol city center.

Bristol City Council  has now corrected the error following a blizzard of publicity via twitter and facebook.

A spokesperson for the counicl told the Bristol Post: “It is not often we see our roadworks hitting the headlines worldwide, but we understand why this rare mistake has captured people’s imaginations.

“While it became something of a temporary tourist attraction, the contractor has now corrected the error earlier today at no cost to the local taxpayer.”