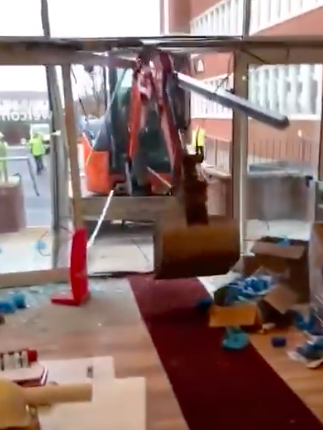 A digger driver told Liverpool Crown Court today that he used his machine to wreck the reception of a Travelodge hotel following a pay dispute.

The BBC reported John Manley,35, pleaded guilty to damaging property and being wreckless as to whether life was endangered.

Manley went on his smashing spree on January 21 at a Travelodge under construction at Liverpool ‘s Innovation Park.

He drove through the hotel entrance causing extensive damage to the reception.

The court heard he had been dealing with “social problems” in the run-up to the incident.

His defence team said their client’s behaviour had followed the failure of a subcontractor on the site to pay him on time for working over Christmas.

Manley admitted the offences on the first day of his trial but his plea of not guilty to dangerous driving was accepted by the prosecution.

Sentencing was adjourned for psychiatric reports and Manley was remanded in custody.