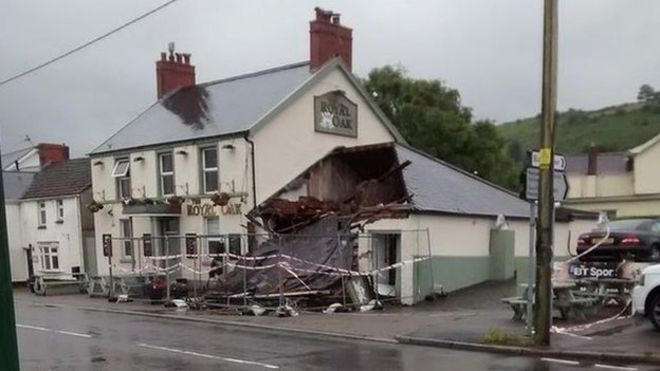 Man smashes pub with JCB because he was refused a drink

Businesses mans Mark Swinsun was refused a drink in his local pub at 11.10 pm so decided to attack the building with a JCB causing £40000 of damage to the building, he was arrested for damaging the pub but police were powerless because he part owned the  Royal Oak pub in the Welsh fishing village of Penclawdd, Gower.

The 45 year old business man used the 28 tonne digger to smash down one end of the pub after a fit of rage and a heated discussion with the people working in the pub.

A police source commented “At the end of the day the building belongs to him so he can do what he likes with it.

After he was told he could not be served Mark Swinsun returned at 1am at the controls of the huge yellow digger – causing £40,000 of damage in just a few minutes.

It steamrollered outdoor tables and umbrellas then crashed into the extension, sending bricks and roofing tiles flying.

Landlady Heather Skipper, 50, said: ‘I came down in my pyjamas to see half the pub had been demolished.

‘The JCB had crashed into the pub but there was no sign of anyone.’