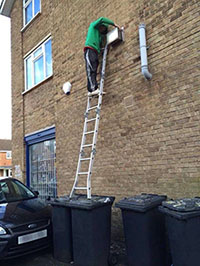 Idiots on ladders campaign has revived a massive response with the most shocking photos being published on their website and Facebook pages the Ladder association which  highlights and runs courses on  ladder safety has been over whelmed with the response to their latest campaign.whelming

As we can see for some of the shocking photos there are some proper ladder idiots out there with little or no regard for their own safety or for the safety of others.

Some likely lads have been on ladders again as the organisers the Ladder Association have seen a record response with more than 50 pictures already received of ladder misuse.

The ladder idiot  with the most comments and likes on Facebook, will be announced in January following a public vote to see who is the most foolish.

Michael Fern Ladder Association commented: “Thousands of people look at these horrifying images each year, and judging by the number of entries received so far, 2014 promises to bring the problem of ladder misuse into even sharper focus.

“The huge response this year shows that people know how ridiculous misusing ladders can be, but it also shows the scale of the problem, with people finding unbelievable pictures all around the UK and beyond.

The ladder exchange is also part of the campaign to make people more aware of the ladders they are using and encouraging ladder users to exchange their older ladders for newer ones.

#Ladderexchange #Idiots on ladders #I want to live another day