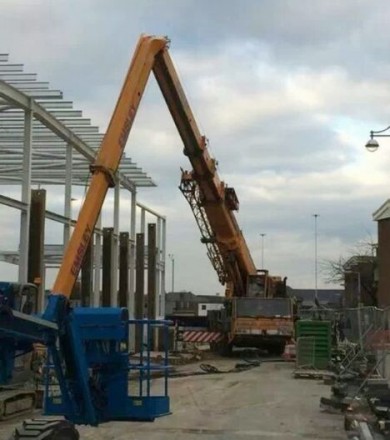 A mobile tracked crane operator has been praised after his quick-thinking ensured nobody was injured when his boom suddenly buckled whilst pulling out piles.

The operator of the 80t all-terrain Demag crane was pulling piles from the ground at a Tesco  supermarket job in Rotherham.

It is thought that a sudden shock load is understood to have caused the boom to recoil and bend at a right angle shocking all those around the site the driver managed to slew the cranes jib  to a safe area and rest in a safe position .Luckily  nobody was injured in the incident in Rotheram.

Emsley Crane Hire owned the 80t Demag, which had been called in to lift the steel piles at ISG’s £18m job to build a Tesco superstore ,the Director of the company John Emsley said that the retractable boom sequence had been set in the right configuration, but the boom had received a shock load during the pile extraction.

He commented : “The crane driver realised there was a problem and reacted immediately by slewing round to a safe area to rest the jib.

“Our company have immediately stopped this crane operation.

“Unfortunately our crane was retracting piles with a pile extraction hammer under a CPA hire.

“Our crane was given a shock load from the hammer causing the jib failure.”