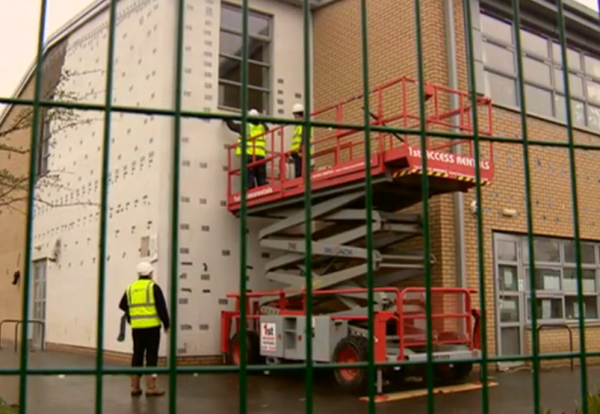 Work to correct the problems has been completed on most of them with repairs still ongoing at six sites across 15 counties.

The construction defects could be present at other schemes built under the public-private partnership model used for the Edinburgh schools.

Glasgow had 23 schools affected of which 22 were built through PPP programmes and one under design-and-build.

Prof Alan Dunlop, a fellow of the Royal Incorporation of Architects in Scotland and a visiting professor at Robert Gordon University, told the BBC: “The PPP financing process was not only used for schools, it was also used for hospitals and a number of public buildings, care homes, things like that.

“I’m wondering, if they found a similar problem in schools, are other things happening in other building type that have been used and building under PPP?

“We have to review and re-think how we build these buildings, especially for our children.

“The only way we found out about Oxgangs was because the wall collapsed. If the wall hasn’t collapsed, we would never have been any the wiser – so we need intrusive surveys to find out just what on earth is going on.”

Ian Honeyman from the Scottish Building Federation commented saying: “The fundamental point that has to be addressed is that people have to have confidence in the buildings that are being produced, and also be confident that people are safe when they’re living or working in them.

“I don’t think it’s something that can be tackled by one individual company or one individual organisation – I think it has to be done by a combination of all organisations and people involved in the construction industry to look at the fundamental things that have gone wrong here, and look at how we can address it as an industry rather than as individuals.”

Honeyman added the way construction work was signed off might need to be looked at.

He said: “The system itself in terms of the certification process requires ultimately one person to sign off a piece of paper called a completion certificate.

“Unfortunately there’s not one person involved in the whole project who is actually in a position that can do that, because it’s a combination of everybody – not one person can be on the site 24/7, see every piece of brick or steel or whatever else is put up, you can only be there so often.

“There are systems in place that are supposed to pick up these issues going through – but that relies on everyone in the chain to do what’s expected of them.

“And when things get missed, that can have an impact further down the chain, and ultimately I think that’s part of what’s happened here.

“I think the whole industry has to look at the system and manage the system better than we have, as it’s indicated at the moment.”