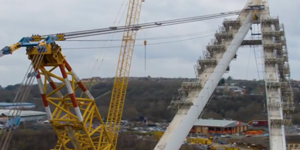 The new Wear crossing bridge construction is well underway after engineers lifted into place the 1,550 tonnes A-frame centrepiece of Sunderland’s new bridge over the weekend.

The massive 100m pylon was raised from a barge to its 90-degree resting place on Saturday, the culmination of nearly two years planning by joint venture builders Farrans Construction and Victor Buyck Steel Construction.

This new type of bridge construction saves valuable time and dangerous work onsite, is being hailed as a landmark in the use of off-site construction for bridge building.

The vast lift took less than 16 hours split over two days – equivalent to raising 125 double decker buses. Nothing of this scale has been raised in this way since the London Eye was erected in 1999.

Stephen McCaffrey, project director for FVB joint venture, commented saying: “It’s a great day for everyone working on the project – we have been working towards this day since we broke ground 19 months ago.

“We could have built the pylon on site, from the ground up, but we chose to fabricate it in one go, off-site, in a factory environment because we had better control over conditions, got a better quality of finish, and could avoid having people working at height.

“The transportation of the pylon from the fabrication yard in Belgium and the raising on site have been challenging, but we planned well and the result was a successful operation.”

“Now our focus turns to the next phases of work. We will be launching the bridge deck out across the river in Spring and will start connecting the cable stays in the summer. After that, people will really see the bridge come to life.”

Sunderland City Council leader Paul Watson commented saying: “We are on budget and on time to complete this project by the spring of 2018, and then we can really start to make sure this new bridge delivers for Sunderland.”

Standing at twice the height of Nelson’s Column and bigger than Big Ben’s clock tower, the centrepiece will be visible from some considerable distance on both sides of the river, as well as from the A19.

The new bridge will link Castletown to the north of the River Wear with Pallion to the south, improving transport links to the city centre and Port of Sunderland from the A19 and A1.