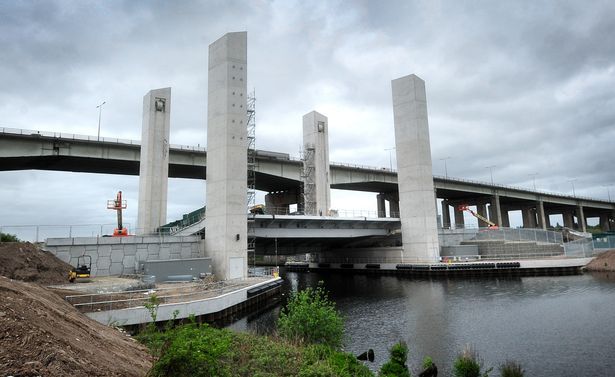 A major structural collapse has occurred on the site of deck of a major vertical lifting bridge over the Manchester Ship Canal near the Barton Bridge on the M60, the moving part of the bridge suddenly collapsed during construction this morning.

The Bascule bridge is being constructed as part of a £50m project to improve traffic flow around the area in the Western Gateway Infrastructure Scheme as part of a major improvement works in the area.

A spokesman for Greater Manchester Fire and Rescue Service said: “A bridge collapsed near the Barton Bridge structure next to the Manchester Ship Canal.

“We are liaising with the construction managers. Thankfully nobody has been involved.

“The ambulance crew has been released. Police remain at the scene investigating.”

The four pillars that support the Vertical bridge are still standing but the metal bridge which has a concrete surface seems to have collapsed.

No injuries or fatalities have been reported emergency services

The construction of the bridge which is joint venture between Hochtief and Buckingham Group Contracting which was commissioned  to ease congestion between Peel’s Port of Salford scheme and the Trafford Centre. The project was being overseen by consultants BWB who provided civil, environmental and structural engineering including infrastructure design services for the project.

The bridge was to be weight tested this morning, this may have been the cause of the accident although it has not been confirmed as no statement has been released by the authorities.