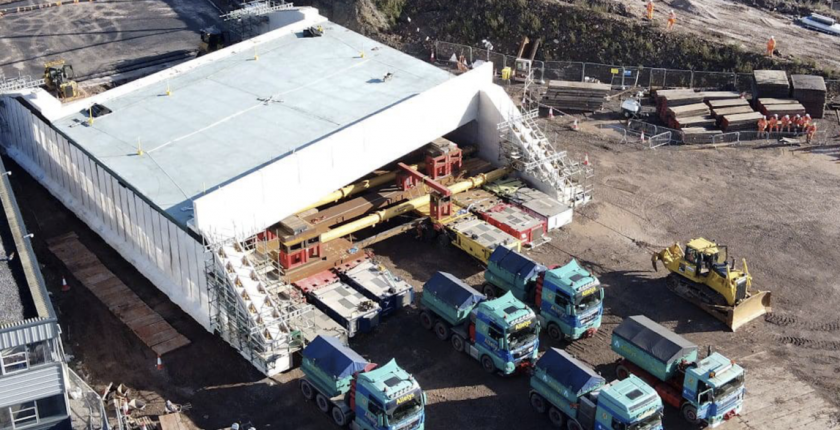 The contractor Alun Griffiths has dodged a bullet by finally freeing a 4,260t bridge that had sunk into the mud, during what was the UK heaviest bridge move and it took some muscle to get it on ether move again.

It took five quarry wagons loaded with aggeregate and a dozer which managed to drag the bridge carried on six dollies onto better ground so the bridge can be transported to its final resting place.

The massive concrete bridge got stuck when its was being moved, the heavy amounts of rainfall this month were a contributing factor in the sinking into the mud.

The bridge can now continue to its final resting position, following the demolition of original Gipsy Patch Lane rail bridge to the North Bristol.

The bridge being built by Network Rail was due to be completed this weekend but is now set to overrun by several days disrupting rail services.

Huge metal plates covered with tarmac has now been laid to stabilise the ground when the self propelled transporters sank into the mud after several days of heavy rain before the big bridge lift.

A South Gloucestershire Council spokesman commneted: “Our focus, alongside Network Rail, is on resolving the issue so that the bridge can be moved into position.
“This is likely to take a number of days and will delay the re-opening of the mainline.
“Rail services are still operating via alternative routes and rail replacement services.”