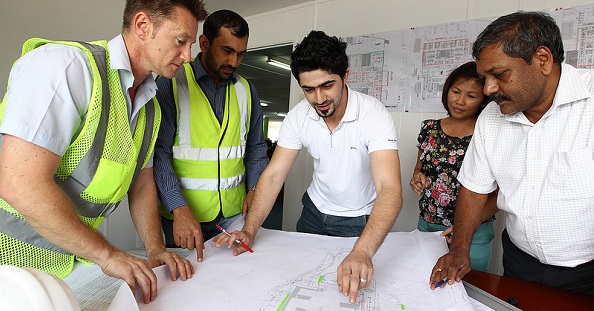 With all of the talk of Brexit and possible recession  the UK’s construction industry particularly housing building has shown a “solid” rise after construction activity hit a seven-month high in October, but firms were hit by Brexit uncertainty and soaring costs from the falling pound, according to a report released today by Markit/CIPS UK Construction purchasing managers’ index.

House building has been the main driver to this growth the expansion in residential construction work is only slightly weaker than the eight-month high seen in September but there could be some slower growth according to the report with a slowdown in new orders many believe this to be because of the falling pound.

Price rises for materials over the coming months could see the gains fall away with the PMI report saying some construction firms had seen customers delay spending decisions because Britain’s negotiations to quit the European Union.

The Brexit decision has intern reduced confidence among firms, with the data showing the second lowest reading since May 2013.

Samuel Tombs, chief UK economist at Pantheon Macroeconomics, commented saying that it was “premature to conclude that the sector is back on a recovery path” and that the rebound has relied “solely” on housebuilding activity.

He commented further saying : “Concerns about oversupply and the potential relocation of financial sector jobs from London due to Brexit likely will continue to subdue commercial construction.

“Meanwhile, growth in housebuilding likely will slow, mortgage rates have little scope to fall further and consumer confidence will weaken as inflation rebounds next year.”

Nationwide Building Society figures which were out on Wednesday showed house price growth ground to a virtual halt in October after 15 successive month-on-month increases.

Many house builders have been upbeat about their prospects post-Brexit, with Persimmon the latest firm to show a resilient performance since the vote as it posted a 19% rise in private sales in its third quarter.