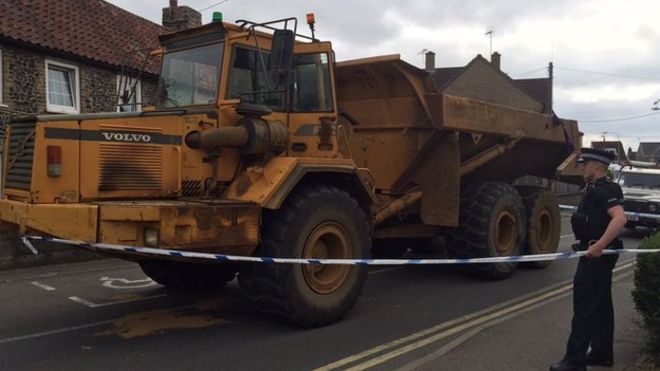 Dumper truck chased by police across Norfolk and Suffolk

A man has been arrested by the  police after a large dumper truck was stolen yesterday afternoon he was pursued for more than 30 miles across Norfolk and Suffolk.

The local police were called to the A11 near Norwich near the Thickthorn roundabout on 12:30 BST after reports the 30-tonne truck was missing by some work colleges.

More than five squad cars and a helicopter were used in the chase with reports that the vehicle was being driven erratically. The dumper truck was eventually stopped in Brandon, Suffolk and a man believed to be in his thirty’s was arrested at the scene.

The dumper was driven along the A11 to Thetford before turning north on the A134 towards Mundford.

It is believed that the man had had an argument with his boss and decided to take the dumper truck after this disagreement, the police have said that the pursuit lasted two-hours and continued in the Santon Downham area until the truck was stopped in Brandon on Bury Road in Suffolk.

Police said the man had been taken into custody for questioning helicopter was from the National Police Air Service.