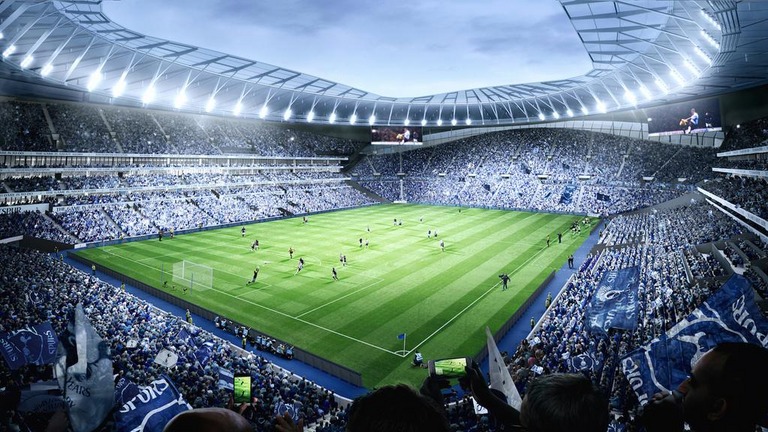 Tottenham Hotspur have revealed there new stadium plans which will be submitted to the London Borough of Haringey in the coming weeks.

Spurs also confirmed that the stadium will host American Football matches with ten NFL games a season after agreeing a new contact with the NFL.

The design team working on the Northumberland Development Project now include Populous in respect of the stadium design, the hotel and the visitor attractions; Allies & Morrison for the new homes and Donald Insall Associates as heritage architects.

Spurs chairman Daniel Levy commented: “Our commitment is to find the best solution for the Club, our supporters and our community. It will be our new home for many years to come and we want it to be exceptional in every aspect.

“Schemes of this scale and magnitude must undergo continuous and rigorous review in order to ensure it is future-proofed and the design is optimised.

“We are determined that this scheme delivers something that becomes an iconic landmark, instantly recognisable around the world and capable of acting as the catalyst needed to kick-start the regeneration of this area.

“These new plans will be transformational for the area and the access and opportunities they afford our communities will be extensive.

“At this stage and barring no major hiccups we are committed to staying on course for a 2018 opening and shall be working closely with Haringey Council to facilitate a timely process.”

•    A visually dramatic new stadium design – a landmark building for Tottenham and London, focussed towards the ‘Home End’, improved sightlines for all spectators and modern technology integral to the design from the outset to enhance the fan experience.

•    An increased capacity stadium – up from 56,250 to 61,000 seats, featuring the largest single tier stand in the UK, now increased to 17,000 seats, with an unrivalled spectator experience throughout and spectators closer to the pitch than at any other comparable size stadium in the UK.

•    Dedicated facilities for the NFL – including a fully retractable pitch revealing a second playing surface, compliant to NFL standard and capable of hosting a range of other events whilst protecting the integrity of the playing surface.

•    An architecturally stunning new terrace on the High Road to host ‘The Tottenham Experience’ – a permanent Visitors Centre and Arrivals Hub including an interactive Museum to celebrate Club history and local heritage, a Cinema, the Club Megastore, Ticket Office and Café.

•    A permanent viable use for the Grade II listed Warmington House – incorporated as part of The Tottenham Experience to house the new Museum, blending old architecture with new.

•    Improved crowd management arrangements along the High Road – with the removal of three buildings that currently create a pinch point along Tottenham High Road where the pavement is just two metres wide – resulting in people walking in the bus lane and the road – allowing instead for a much wider pavement to cope with large crowds.

•    Enhanced public open space – comparable in area to Trafalgar Square, includes a multi-use games area, high quality landscaping, cafes, dedicated events and community programmes managed by the Tottenham Hotspur Foundation, and the ability to walk uninterrupted all the way round the stadium.

•    A new 180 bedroom hotel with a dedicated training programme for the hospitality industry – providing high quality accommodation in Tottenham and opening up new career opportunities for local people.  49 serviced apartments will occupy the upper floors.

•    A fantastic new building to host Extreme Sports – bringing people to Tottenham on a daily basis with activities for all ages, including the tallest indoor climbing wall in the world.

•    A spectacular ‘Sky Walk’ – an adrenaline-filled experience and attraction for all ages walking on top of the stadium with spectacular views across London.

•    579 new homes, including affordable housing – up from 285 homes in the current permission, meeting a key need for more homes in London.  Set out across four new residential buildings, every apartment will enjoy access to a private balcony in addition to communal gardens and child play areas.

•    A new community health centre – serving existing and new residents to the area, improving access to GPs and health screening.

The club added: “We have already commenced basement works and we shall now simultaneously move forward with the tender process along with additional planning requirements running in parallel.”

The price of the original contract was £400m and Sir Robert McAlpine, Bouygues, Balfour Beatty and Laing O’Rourke have all been invited to tender.