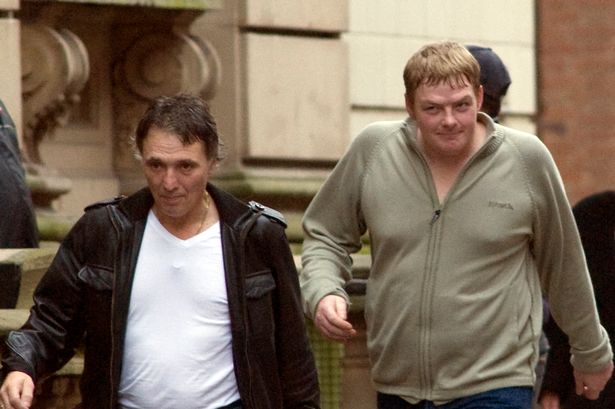 Robert Bennett and Ronald Reeves, of Acocks Green, targeted vulnerable customers out of thousands of pounds in a roofing con.

A father and son have been jailed for unscrupulously targeting elderly people with one old lady with Alzheimer disease being hit for  £52000 after being repeatedly marched to the bank.

The older man Robert Bennett, 61,  of Chestnut close, Ascocks Green was convicted of six charges of fraud, theft, and transferring criminal property, was sentenced to eight and a half years.

The other defendant Ronald Reeves, 38, of Sherborn Road, also Acocks Green, was handed a five-year term.

QC Recorder Richard Benson told Bennett “You deliberately, unscrupulously and ruthlessly preyed on the elderly and vulnerable.By doing so you deprived them of substantial funds in order to satisfy your greed and perhaps your drugs habit.

“You used your glib tongue in order to draw your victims into feeling a sense of security and in one case, Mrs Cumberbatch, manipulated her – knowing she was Alzheimer disease into thinking that you were her friend.In short, you groomed her so that you could haemorrhage her three bank accounts, dishonestly removing over £52,000 over a period of several months.

“Not satisfied with that, you and your son scammed Mr Kimberley out of almost £5,000 of his money, pretending you had done a satisfactory job on his home.”

The the hearing at Birmingham Crown Court heard  that the pair had also targeted a man who was “obviously vulnerable” and unable to resist their “manipulative dishonesty.”

The judge said to Bennett “You sat with him in his home while your son went out with his bank cards and pin numbers – in order to prevent him from using his phone either to phone the bank or the police because you knew what you were doing was wrong.You had not got permission to do so. His account was emptied.”

“In evidence you both lied and neither of you have shown any remorse.”

The defendants, who traded as R & P Roofing,had taken money from victims for roofing and building work and had then gone on to defraud and steal from their bank accounts.

John Evans, prosecuting, said there was a persistence and that there  had been five victims, including the 78-year-old woman who Bennett had gone to the bank with to help her withdraw £700.

James Doyle, for Bennett, commented: “He had a long-term partner who he married. She died in 2008. He found her death very hard to bear and he descended into severe class A drug addiction, hence the need for money.”

Talbir Singh, for Reeves, said the offences had not been “tainted with any high degree of sophistication” and there had been no attempt by the fraudsters to disguise their identities.