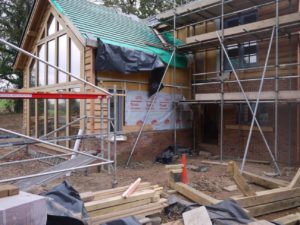 Carpenter seriously injured after lack of planning on site

A construction company has been fined after a self-employed joiner received serious eye injuries when he was struck in the face by an object while stepping onto a scaffold platform.

Nottingham Magistrates’ Court heard that, on 2 November 2017, the injured worker was installing cladding to a newly built house on Southwell Road in Kirklington. He stepped on a platform from a tower scaffold left on the working platform which was overhanging the edge. As he stepped onto the platform, it flicked up and struck him in the face, causing him to fall from the scaffold and causing serious injuries to his eye.

An investigation by the Health and Safety Executive (HSE) found Pearson Property Developments Ltd had failed to sufficiently plan the work at height and had inadequate site induction procedures in place, meaning the competency of workers on site was not properly checked.

Consequently, the company did not know whether workers were sufficiently competent to erect scaffolding and tower scaffolds, and additionally failed to ensure the pieces of work equipment were properly signed off as safe to use by competent persons. Furthermore, the investigation found insufficient supervision and monitoring of the site, which lead to ad-hoc working methods that were neither observed nor challenged, meaning that the improper use of work equipment was not seen and rectified.

Speaking after the hearing, HSE inspector Phil Gratton said: “This incident could so easily have been avoided by properly planning the work and carrying out correct control measures and safe working practices.