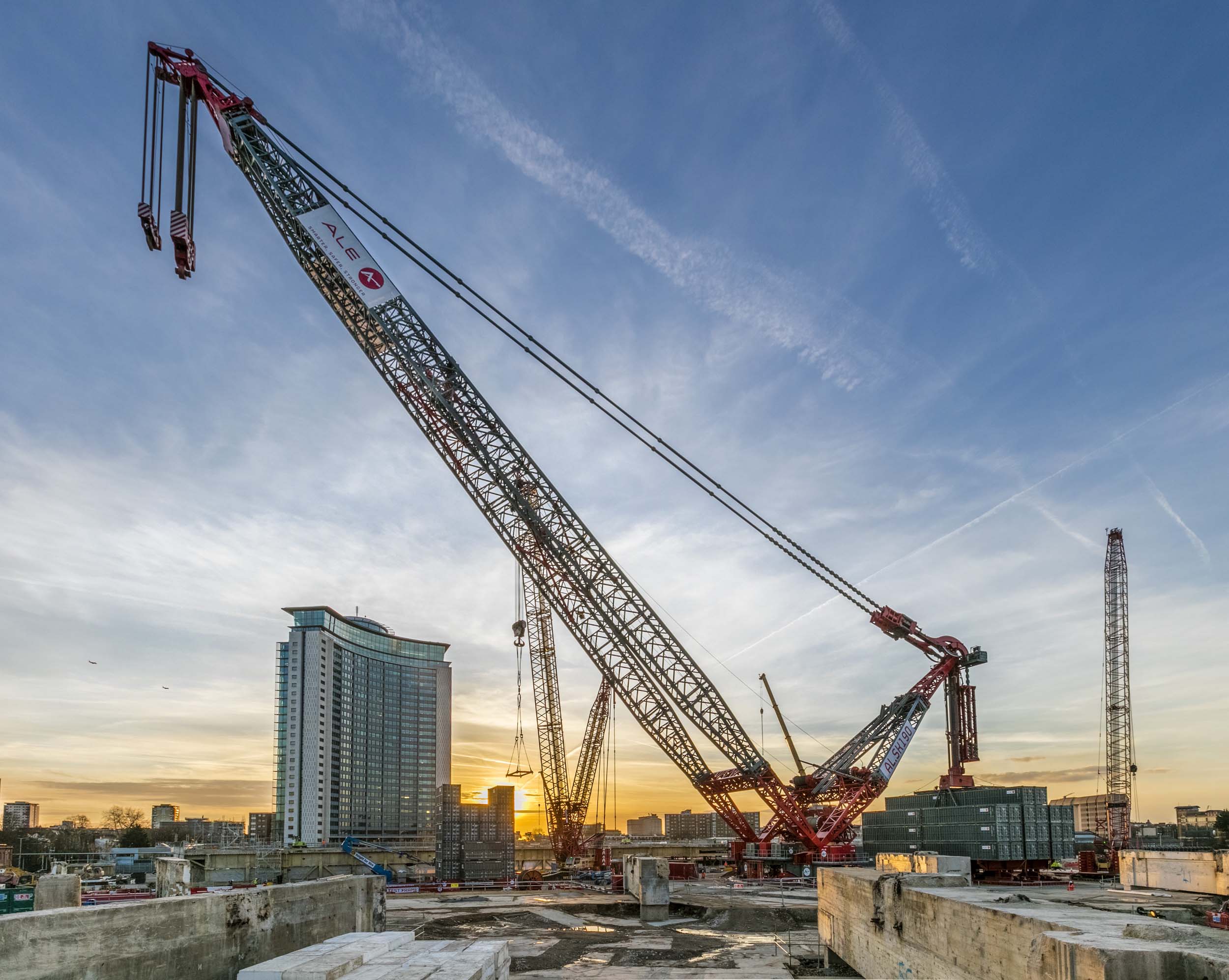 London’s largest crane is ready for lifting at Earls Court

London’s largest heavy lifting crane has been erected, and is now ready to begin work on site at Earls Court. The development, led by Capital & Counties Properties PLC will create 8,000 homes and 10,000 new jobs as well as a new High Street and a new five-acre park in London.

Demolition of the former exhibition centres to ground level is complete after two years of intensive work on site, managed by Capco’s construction partner, Keltbray. The crane is the most visible part of the important site preparation that will take place throughout 2017 to prepare the site for future construction.

Some new lifting technology used in the offshore industry to lift 61 portal beams out from over the London Underground lines that supported the former exhibition centres.

The biggest of the Exhibition Hall supporting beams weighs in at 1,500 tonnes, the same as 118 London buses, and has been nicknamed Big Bertha.

At twice the height of Nelson’s Column, it is the largest capacity lifting crane ever to be used in London and will operate only on the Earls Court site avoiding oversail of the nearby properties.

The heavy lifting crane (technical name: AL.SK190 crane) is an industry-leading innovation and was designed and manufactured by specialist engineering firm, ALE. The crane will carefully lift 61 ‘portal beams’ out from over the London Underground lines that lie below the former exhibition centres. The large concrete beams supported the weight of the exhibition centre and need to be removed to enable development on site.

The smallest beam is 80 tonnes with the largest beam weighing 1,500 tonnes, the same as 118 London buses. This crane was specifically chosen as the optimum engineering solution and the method has been designed to minimise the impact on local residents, to help reduce the carbon footprint of the project and will significantly shorten the project timescales.

The crane is 120m high which is more than twice the height of Nelson’s Column and is the largest capacity lifting crane ever to be used in London. The crane will operate only on the Earls Court site and will not oversail any of the nearby properties.

Speaking about the progress on the site, Mike Hood, Group Development Director, Capco said: “We are making good progress at Earls Court to prepare the site for future development. The heavy lifting crane is the most visible part of this work and will be part of the London skyline for the next year. We know there is huge interest in the crane and we are encouraging people to visit the Earls Court Project Rooms for our monthly open day to find out more.”

David Rowe, Technical Manager for Keltbray, the specialist contractor overseeing the site works at Earls Court added: “By utilising this crane and lifting method, disruption is minimised and the crane’s high capacity and precision lifting technology will reduce the overall project timescale considerably. With the successful demolition of the former exhibition centres last year the lifting of the large portal beams is the next big task at Earls Court as we prepare the site for construction. The project team has worked tirelessly to ensure the most appropriate technology was chosen and implemented in order to minimise disruption to our neighbours.”

Giovanni Alders, Sales Manager, Global Projects Division for ALE said: “Operationally, this crane can perform lifts previously unachievable and reinforces the innovation seen throughout the whole project. We are looking forward to progressing with the project and executing the first lift.”

The first lifts will take place in late March 2017. The lifting of the portal beams will occur overnight in ‘engineering hours’ after the last District Line train has passed through the tunnels underneath the beams. Work is expected to conclude by the end of 2017 when the crane will be dismantled and leave Earls Court.