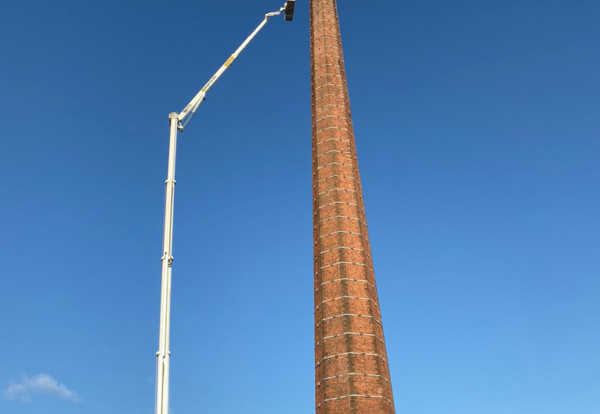 A man has died after being stranded in the early hours of Monday morning hanging from his legs on top of the former cotton mill tower, it is not known how he got into the upside down position, an attempt was made with a helicopter to try and get him down this subsequently failed, then a large cherry picker was brought in to rescue him but he was pronounced dead.

It is unknown how he got up there or what he was doing.

An earlier attempt to rescue him using a helicopter was unsuccessful.

Supt Matt Kennerley of Cumbria police said: “All agencies worked as quickly as possible to try and rescue the man. The operation involved road closures, the use of drones to assess the scene, a helicopter, and a cherry-picker brought in from Glasgow. All this was done with the aim of bringing the man down safely and while maintaining the safety of emergency services staff.”

The man, who has not been named, was recovered after the cherry-picker was used to transport specialist technicians and a team from Lancashire fire and rescue trained to work at height to the top of the chimney to lower him down. The team brought the man down using a specialist crane and rope access equipment.

Kennerley added: “The thoughts of all the emergency services and partners are with the family and friends of the man. Specialist welfare police officers are supporting his family at this difficult time.

“An investigation will commence into the circumstances into how and why the man was on the chimney and the constabulary will be informing Her Majesty’s coroner.”

Cumbria fire and rescue service made a public appeal for a cherry-picker or aerial work platform and one arrived shortly after 2pm. A Coastguard helicopter attempted a rescue earlier on Monday, but the operation was aborted because of the man’s precarious position