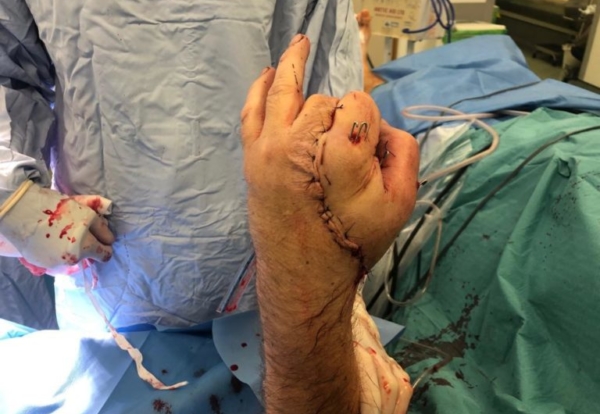 A carpenter had cut off his thumb and index finger with a chop saw and brought to a plastic surgeons at St George’s Hospital in Tooting where they reattached a carpenter’s detached digits.

Surgeons battled for 17 hours to save his hand which is missing a middle finger but has now regained some movement.

Consultant Plastic Surgeon, Mr Roger Adlard said: “When we took him to theatre I realised it was much worse than I’d first thought.

“It had been cut off almost completely in two places – at the base of his palm and again just below the fingers – resulting in a double-level amputation.”

“Time was also against us; his detached fingers were getting warm and left too long without blood they would rapidly decompose and be impossible to re-attach.”

Lelliott is full of praise for the medical team who worked so hard to save his hand.

He commented saying: “All I remember was coming through the doors into A&E and being greeted by a phenomenal amount of people; I couldn’t count them.

“The care I’ve received has been fantastic and I’ve got so much gratitude for everyone; from the paramedics who were first on the scene to the staff working in the intensive care unit and on Vernon Ward at St George’s.

“Words can’t describe it because I was expecting to wake up without a hand. It’s just trying to get it to work now. It’s unbelievable really, I’m so grateful.”