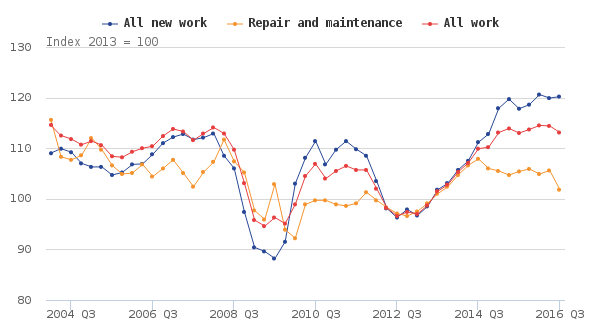 UK construction has slipped away post Brexit with new figures from the Office for National Statistics (ONS) have shown a rocky path for the industry, with output falling by 1.1 per cent in the third quarter compared with a 0.1 per cent fall in the quarter before.

This is the first quarterly estimate for construction output covering data post-brexit-referendum. In Quarter 3 (July to Sept) 2016, output in the construction industry was estimated to have decreased by 1.1% compared with Quarter 2 (Apr to June) 2016.

Downward pressure on the quarterly estimates came from all repair and maintenance which decreased by 3.6%, partially offset by an increase in all new work of 0.3%.

The gross domestic product (GDP) preliminary estimate showed construction output decreased by 1.4%. The revision to a decrease of 1.1% has no impact on GDP to 1 decimal place.

In September 2016, construction output increased by 0.3% compared with August 2016. All new work increased by 1.2% while there was a fall in repair and maintenance of 1.4%. Users should note that we always warn against overly interpreting 1 month’s figures.

Howard Archer, chief UK and European economist at IHS Global Insight, said it was a lacklustre end to a poor quarter from the construction sector.

“September’s rise of 0.3 per cent was insufficient to prevent construction output clearly contracting in the third quarter, by 1.1 per cent quarter-on-quarter,” he said.