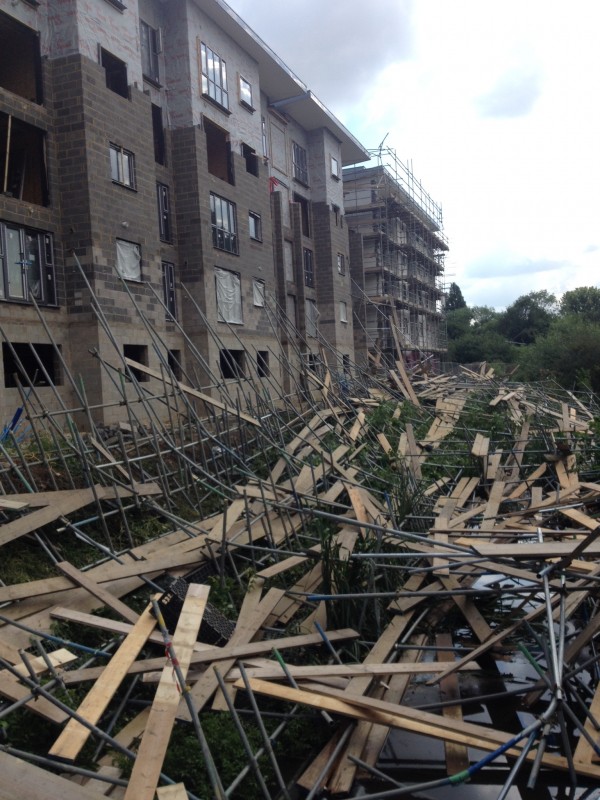 Three companies working on construction of residential apartments have been sentenced after workers narrowly escaped injury when a huge scaffold collapsed in the River Brain.

The work was being undertaken at the Former Riverside Centre, in Braintree when on 1 July 2014 the scaffold, which was forty metres in length and five lifts high, collapsed into the river as workers leapt through window openings to avoid falling with it.

HSE served a Prohibition Notice following the collapse, stopping all further work until an adequate design had been drawn up.

Following the collapse, SC Cousins continued to send untrained scaffolders to site and Parkland Developments allowed them to adapt the scaffold. Parkland also continued to allow site labourers to adapt scaffolding, even providing the tools to do so.

On Monday 2 November 2015, the court was told Parkland Developments Ltd had received an inspection from HSE at the same site several months prior to the collapse where five enforcement notices were issued for other management failings. A Notification of Contravention was also issued on CDM co-ordinator Haze and Safety Ltd for failing to provide suitable and sufficient advice to the client.

SC Cousins Scaffolding Ltd had also received an inspection from HSE at a different site five weeks before the collapse and had been informed of the design requirements for scaffolding.

Parkland Developments Ltd of Witham Road, Black Notley pleaded guilty to breaching Regulation 22(1)(a) of the Construction (Design and Management) Regulations 2007. They were fined £20,000 and ordered to pay costs of £2,893.

S C Cousins Scaffolding Ltd of Church St, Billericay pleaded guilty to breaching Regulations 4(1)(a), 5 and 8(b) of the Work at Height Regulations. They were fined a total of £15,000 and ordered to pay costs of £1,981.

Haze and Safety Ltd of Meadowside, Braintree pleaded guilty to breaching Regulations Regulation 20(1)(a) & (b) of the Construction (Design and Management) Regulations 2007. They were fined a total of £5,000 and ordered to pay costs of £1,981.

After the hearing, HSE inspector Adam Hills said: “This collapse was entirely preventable and it is only by chance that multiple fatalities did not occur. It beggars belief that following the collapse, no lessons were learnt and untrained people were still allowed to adapt the scaffold.

“This case highlights the importance of ensuring those who undertake construction work have the relevant skills, knowledge, training and experience to do so.”