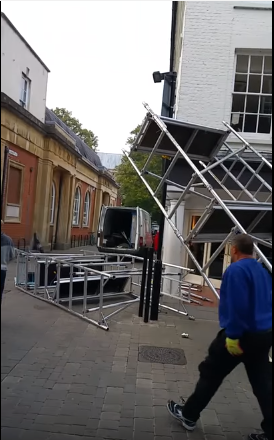 The video show what happens when you try to move  a 30ft high mobile tower without dismantling it first.

Shoppers and bystanders dashed to move their cars in Winchester High Street out of the way of a collapsing aluminium mobile tower scaffold.

The contractors who had been clearing out gutters and doing maintenance on a shop reportedly proceeded to move the 30ft tower from one side to the other without dismantling it first, nobody was hurt in the incident.

A spokesperson for the industry trade body for the safe use of mobile access (PASMA) commnetd : “Given the many fundamental errors in the construction, use and movement of the tower evident in this video, it was almost inevitable that it would overturn. To assemble a narrow width tower to that height without stabilisers or tying in is quite simply dicing with death. To then even countenance moving it, is foolhardy beyond belief. We are relieved that there were no injuries or fatalities as a result of this incident.