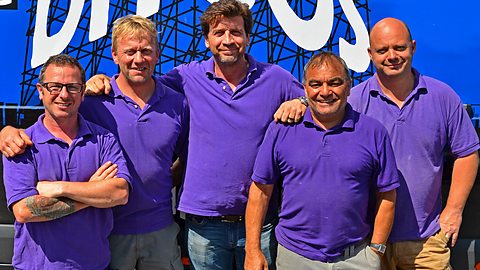 Kier and ISG to head up all star social housing cast for DIY SOS.

Just ahead of Armed Forces Day on Saturday (27 June) the social housing industry has confirmed that it is coming together to collaborate on a major new charitable housing regeneration project in Manchester, to provide much-needed new homes for veterans, which will be filmed by BBC DIY SOS.

Orchestrated by charities Walking With The Wounded and Haig Housing alongside Manchester City Council, the BBC1 DIY SOS Veterans Special project will be delivered by a team headed up by Kier and supported by other big name contractors including ISG. The project will be the biggest DIY SOS big build ever filmed.

In just 12 days, this ambitious project will renovate eight dilapidated homes on Canada Street in Newton Heath, Manchester to create four adapted homes for veterans and their families, as well as a Walking With The Wounded advice and therapy centre.

In addition, the project will deliver a ‘facelift’ to all 62 properties on Canada Street and the adjacent New Street, as well as ‘streetscaping’ to provide an improved, more resident-friendly neighbourhood that everyone – veterans and their local community alike – can feel proud to live in.

Kier volunteered to project manage and lead the delivery of the scheme, as it replicates the highly successful regeneration project that the company delivered in partnership with Stoke-on-Trent City Council for its award-winning £1 homes initiative, which was part of a £3m plan to regenerate the Cobridge neighbourhood in the city.

David Mawson, managing director of Kier housing maintenance business, said: “This is a great example of the social housing sector at its best. The concept is a real credit to Walking With The Wounded and Manchester City Council. Equally there has been a tremendous response from companies of all sizes and areas of expertise, volunteering to help make this project a reality, and we are delighted to be able to use our experience delivering projects like the Stoke £1 homes initiative to project manage the industry team.”

Other major contractors like ISG have also provided instrumental support, and the companies will work together with many other smaller contractors, suppliers, volunteers and representatives from the Armed Forces, as well as the famous faces of the DIY SOS team, to deliver this incredible project.

Ed Parker, chief executive at Walking With The Wounded, explained: “Manchester City Council is providing a remarkable opportunity to our veterans. One of our core philosophies at Walking With The Wounded is for our veterans to gain their independence outside the military, and two of the key factors for this to succeed is a home and a job. This project will provide both.”

Jude Millett, Empty Homes team manager at Manchester City Council, commented: “Manchester City Council welcomes the opportunity to support and act as CDM client for this exciting project, which will put the Manchester Armed Forces Community Covenant into action at ground level, by creating veteran accommodation and training opportunities. The project will also bring empty homes back into use and improve the environment for the local community.”

The two-part programme will be aired in the autumn.