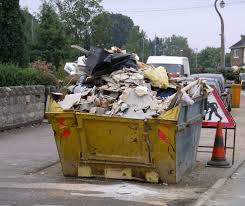 Builders come bottom of recycling league according to a survey carried out byBusinessWaste.co.uk

Most builders are not known for their tidiness but it turns out plumbers and electricians come well above builders who themselves come bottom of the league table when it comes to site waste management and recycling, according a national waste company. BusinessWaste.co.uk have also found that the construction sector has fallen behind the rest of industry on waste issues.

plumbers and electricians often recover every last scrap of waste from their job to insure it ends up recycled or put in the right bin, and it’s their example that the rest of the trade needs to follow to minimise their spend on waste removal but this could be something to do with the materials they use which can be redeemed in value.

“It’s probably because plumbers know the value of their waste that they make sure that they clean up after themselves,” said BusinessWaste.co.uk spokesman Mark Hall, “but that doesn’t mean to say that all plumbers and sparks are complete angels”.

Controlling and recycling waste can be cost effective and help others around you by using the right waste bin.

“You’ve got a lot of people coming and going all the time, and it’s tough filling them in on site procedures. To some, one skip or bin looks very much like another, so there’s always the problem of cross-contamination of waste,” says Mark Hall. “More waste means more money being spent on its management. These are important lessons for the construction sector.”

BusinessWaste.co.uk asked lots of different workers in the construction trade about their rubbish habits, and found that builders’ and bricklayers’ reputations went before them when it came to leaving waste behind. According to BW, when asked which trades were best and worst at sorting their waste, they were ranked from worst to best like this:

The league table only tells part of the story, says BusinessWaste.co.uk – construction trade workers were not slow to point out their colleagues’ bad habits.

However, despite their reputation for site cleanliness, some plumbers and electricians – supposedly the tidiest in the trade – own up to their own bad habits