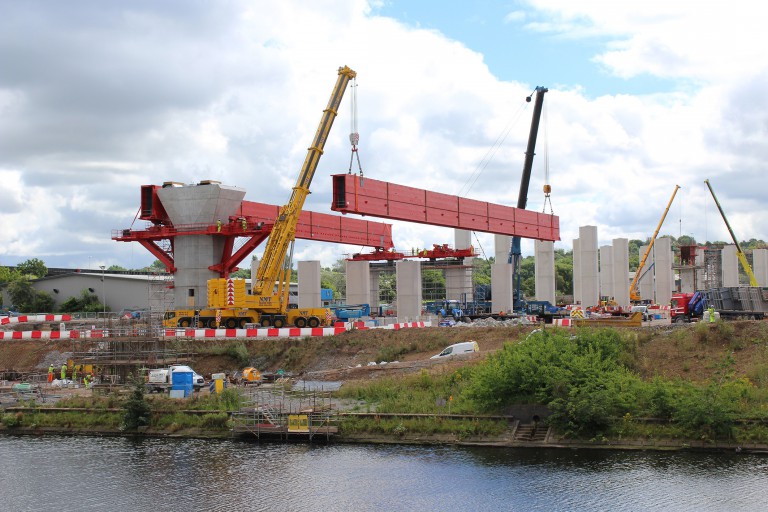 The new Movable Scaffold System (MSS) – which will be used to build the south elevated approach viaduct connecting Runcorn’s main road network to the Mersey Gateway bridge, was lifted into place over two days this week.

Two giant cranes – one 700 tonnes and one 750 tonnes – were used in a tandem lift to lift the two MSS 240 tonne main girder sections over 40 feet up into the air and on to landing skids on the first pier of the approach viaduct being built over the Astmoor Industrial Estate.

Each lift took around three hours to complete, and the construction team is now busy assembling the MSS, using a self-erect tower crane to complete the work. Once assembled, it will be named by local schoolchildren and launched into action across the Manchester Ship Canal and towards the River Mersey in September.

The new MSS is the same specification as ‘Trinity’, the machine that is currently building the north approach viaduct in Widnes, except it is red rather than orange.

There was a team of around 30 people working purely on the lifts as they happened.

Declan Cannar, MSS Build Team General Foreman, said: “The whole team did a great job – it was very important that everyone worked together to ensure the lift was achieved safely and without a hitch. It is a delicate process with some very heavy machinery, and effectively the two pieces fit together like a jigsaw 40 feet up in the air.”

Hugh O’Connor, General Manager for Merseylink, said: “The engineering technology we’re bringing to this project is quite incredible, and it is going to be wonderful to see these two giant bridge building machines in action at the same time. Lifting the MSS 40 feet into place is a delicate task with significant safety risks, so we’re very pleased it has been completed successfully.”

Cllr. Rob Polhill, Leader of Halton Borough Council, said: “It never fails to amaze me how the Merseylink team is utilising the most state-of-the-art machinery and innovative methods of construction to build our new bridge.

I’m looking forward to seeing the second MSS in use – and even more excited to find out its name.  I’m sure the local schoolchildren will have some fantastic ideas!”