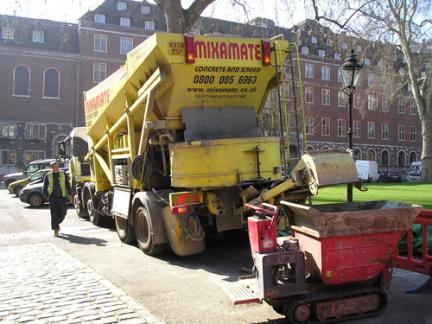 Mixamate has brought out a brand new app for contractors to help them calculate volumes for concrete pours and screeds.

The app which has been developed by Mixamate as a tool for on-site use both on and offline to make calculations easy. This allows it to be used in areas of low connectivity, such as when calculating the materials required for a basement job. It also allows users to call Mixamate from directly within the app to order the delivery, immediately placing an order with a member of their dedicated team based on the calculations they have just made saving time and money.

“Reassurance in your measurements is very important when you’re running  around overseeing a thousand things at once,” said Chris Smith, Managing Director for Mixamate. “Because of our heritage and brand reputation, our customers trust us on a daily basis to help them with their concrete and screed calculations. We therefore wanted to develop that concept further and give them a real working tool that they could take with them onto a site, supported by the Mixamate name and with a direct line into our dedicated team. The Mixamate branded concrete and screed calculator app does just that.”

The Mixamate Conqueror Mixing Truck has evolved beyond volumetric concrete to provide weigh-batched materials with every pour, administered via the machine’s unique on-board computer system. With the launch of its new app Mixamate has extended this accuracy directly into the hands of the people who are ordering it, providing precision and accountability through every step of the mix on site delivery phase.

A beta version of the Concrete Calculator App was launched to Mixamate account customers earlier this year, and achieved over 1,000 downloads within a 2 month period. Having listened to customer feedback and extended the App to include a dedicated direct calling service, it is now available to all via the App Store and Google Play platforms.