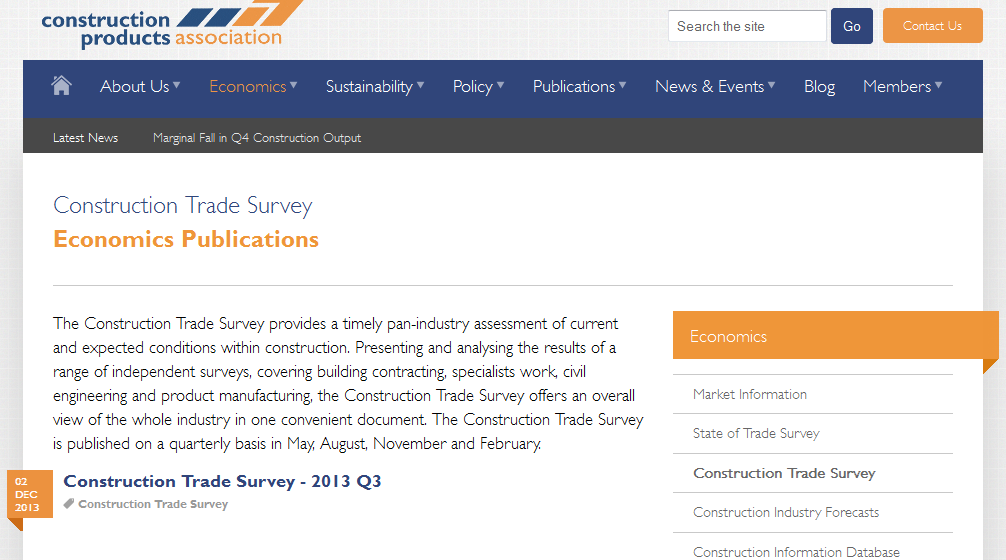 More good news for those in the construction sector according to  The Construction Trade Survey which  provides a timely pan-industry assessment of current and expected conditions within construction. Presenting and analysing the results of a range of independent surveys, covering building contracting, specialists work, civil engineering and product manufacturing.

Commenting on the survey, Dr Noble Francis, Economics Director at the Construction Products Association, said: “The recovery, which started in 2013 Q2, continued, though risks remain. The rises in activity were slower than in previous quarters, and orders for new work similarly decelerated, potentially highlighting uncertainty amongst contractors as to whether the recovery would be sustained.

“Growth was driven by the housing sector, though this was partially offset by a drop in repair and maintenance work. Building contractors, SMEs and civil engineers reported rises in output, although Q4 levels were not as strong as Q3. Indeed, only product manufacturers saw activity levels higher in Q4 than Q3.

Stephen Ratcliffe, Director UKCG, said: “Rising labour costs highlight the need to tackle skills shortages as we move towards recovery, and for a clear pipeline of future work so firms have the certainty to invest in apprenticeships and other long term training programmes.”

The national federation of builders commented also on the report saying : “These figures highlight the fragility of the construction industry’s recovery, which is being driven by house building. Ongoing investment and future prospects point to further growth for the construction industry as a whole but as the economy recovers, it is important for companies to be at least as vigilant about costs, cash flow and late payment as they were during the downturn.” form Julia Evans, Chief Executive of the National Federation of Builders