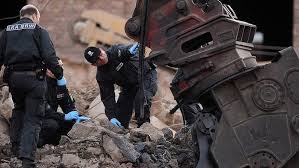 A World War Two bomb thought to be dropped by the allied troops has exploded at a construction site near a west German town, killing a man, injuring eight other workers and causing significant damage to nearby buildings and cars.

The explosion occurred after a digger accidentally struck the device during excavation work in Euskirchen in the state of North Rhine-Westphalia.

The accident that killed the driver and the wounded suffered serious injuries, shook an industrial area in the town, near the former capital Bonn in western Germany.

“There was a huge blast wave. In the vicinity of the accident site and surrounding streets, home windows shattered and garage doors were pushed in.”

The ground below many Germany cities still contains unexploded ordnance dropped by Allied and Soviet forces in the Second World War, but most is safely defused when found.

Every year hundreds of war-time bombs are still uncovered in Germany, most were dropped by allied troops though most are successfully detonated.