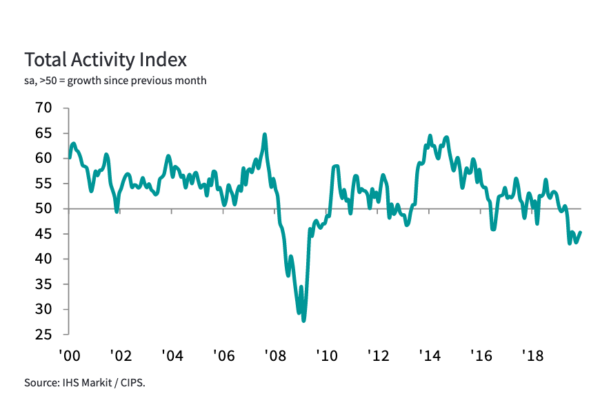 The construction sector recoded a drop in business during November but the pace of decline is moderated to its slowest since July.

The report from the “Bellwether IHS Markit/CIPS UK Construction Total Activity Index” rose to 45.3 in November from 44.2 in October.

Anything below 50 is a fall but November’s figure was the slowest drop in overall construction output for four months.

Civil engineering was the worst performing category, followed by commercial building while a much slower decline in housing activity helped to moderate the overall drop in construction output.

“Construction firms have not seen dwindling new orders for this length of time since 2013, as clients continued to defer spending large and small, citing political indecision as the cause of their non-committal.”

Tim Moore, Economics Associate Director at IHS Markit, said: “House building has been the most resilient category of construction output in 2019. However, it remains a concern that overall volumes of residential building work have dropped in each month since June, which is the longest phase of decline since the start of 2013.

“Greater spending on transportation and energy projects had been expected to help boost infrastructure work this year and next, but survey respondents indicated a sustained soft patch for overall civil engineering activity in November.

“Some construction companies reaffirmed their concern about the delivery of road and rail projects, with delays to contract awards acting as an additional headwind to growth projections for 2020.”