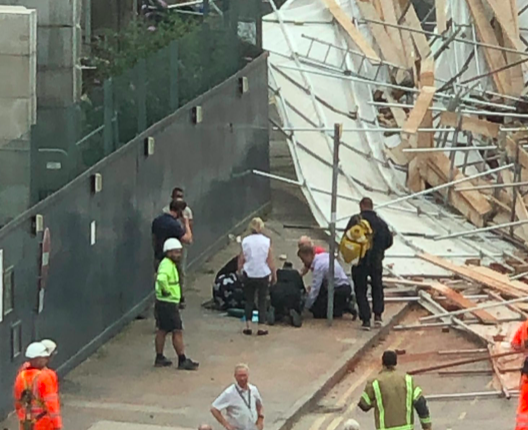 Firefighters are still searching for people feared trapped following a major scaffold collapse in Reading on Wednesday morning, three people have been treated for injuries at the scene and have been taken to the Royal Berkshire Hospital in Reading.

The injured are believed to have been a site worker and two passers-by.

The multi-storey scaffold fell from part of the former Friars Walk Shopping Centre which is being demolished to make way for a planned £500m mixed-use scheme.

A bystander at the scene , who asked not to be named  commented saying: “I was walking down Greyfriars Street to the office opposite the site, when I heard this very loud crash.

“I thought it was just demolition work as they had been doing that for a while there, so I paid no attention. It was only when I turned around I saw a woman who saw what was happening and she was running away.

“I saw this big cloud of dust coming towards me so I ran back to help the woman who looked badly injured. I went to check she was okay and although she was very shaken. she was still talking fine.

“Then I did what I thought was best which was to give first aid where I could until the emergency services arrived.”

Another committed adding: “I heard it first. Thought it was a low flying plane. Coworker said to look and by then it had already fallen with dust settling.”

Mr Heselton, Incident Commander for SCAS said ambulance crews had been called to the scene about 11.15am.

“We have assessed three patients who sustained minor injuries as a result of the collapse; a worker at the site with a head injury and a male and female couple who were passing by – the lady sustained an ankle injury and the gentleman was in suspected shock.

“These three patients have been taken to the Royal Berkshire Hospital in Reading for further treatment and assessment.

“We are remaining on scene to support colleagues from Royal Berkshire Fire & Rescue Service who are conducting a thorough search of the collapsed structure, supported by an Urban Search and Rescue Team (USAR) from Buckinghamshire and Milton Keynes Fire and Rescue Service.”