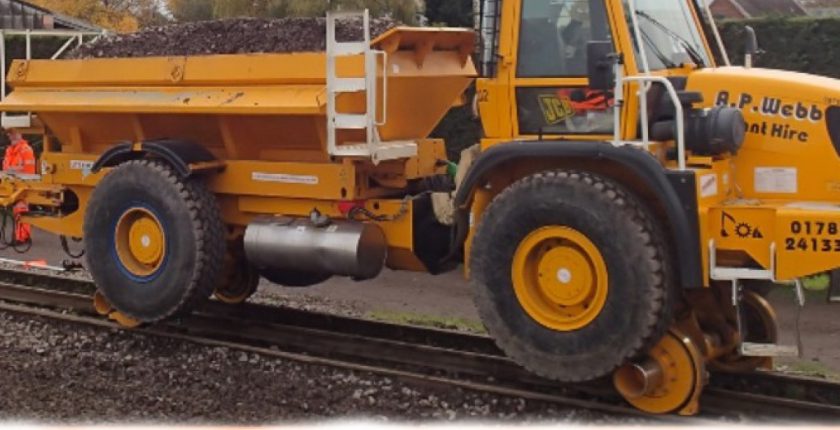 Two seriously injured when RRV backed into them

The extent to which drivers of road-rail vehicles can or cannot see the railway line in front of and behind them has been put in the spotlight by the Rail Accident Investigation Branch (RAIB) after two workers were seriously injured in a accident with an RRV.

At around 02:30 hrs on Wednesday 19 September 2018, a road-rail ballast distributor, that was travelling in reverse on the line between Chester and Crewe, collided with a small personnel carrying vehicle, near Cholmondeston in Cheshire. Two track workers who were in the rear of the personnel carrier were injured, one of them suffering life changing leg and back injuries. There was some damage to the two vehicles involved and minor damage to the track.

The collision occurred because the design of the ballast distributor was such that there was very limited visibility of the line ahead when it was being driven in reverse, and because no-one was controlling its movements from the ground, as mandated by both the railway Rule Book and the vehicle-specific operational restrictions.

There was also confusion amongst the staff involved about the location of the work that was being undertaken and the location of personnel. As a result, those on the ballast distributor believed that the personnel carrier was further up the line than it actually was.

The RAIB has made two recommendations. One is addressed to RSSB to review the effectiveness of technical standards for managing safe travelling with road-rail vehicles, in particular considering controls for maintaining visibility of the line ahead and controlling speed. A second similar recommendation is targeted at Network Rail for it to consider the same risks for machines that are already operating on the network.

The RAIB has also identified five learning points, relating to the use of safety related communications protocols at site, awareness of measures to be taken when visibility of the line ahead is compromised, taking account of machines’ limitations when planning their use, the control of risk in long worksites, and ensuring that machine operators are fully trained in the operation of their machines.

Driving a truck loaded with ten tonnes of stones backwards for several miles along the road is not something most people would contemplate doing. When that truck has been converted for use on the railway, the driver no longer has to worry about steering it – but being able to see where you are going is just as vital. This sad accident, in which a member of railway staff suffered life-changing injuries, has revealed some alarming weaknesses in the design of railway equipment and the railway’s working processes.

The machine that ran into a stationary personnel carrier was a road lorry that had been converted so that it could be used on both road and rail. On the railway, turning round is not easy to do and so it would have to travel significant distances in reverse. However, the driver’s seating and controls had not been altered, so when the machine was going backwards, the driver had to turn round in their seat, to see where they were going. The load of ballast carried by the lorry obstructed any view directly along the track.

The RAIB’s investigation found that there had been inadequate consideration of the practical aspects of using such a machine on the railway. To comply with the rules, the machine would have to travel at walking pace, accompanied by someone walking alongside the track (usually in the dark), who would be at risk from all the tripping and slipping hazards of the modern lineside. This could mean taking hours to reach the site of work, wasting much of the time available for track maintenance at night. In this case, the crew ran backwards at an average speed of between 11 and 15 miles an hour, in the belief that there was nothing in the way.

Neither approach was safe or practicable. The Office of Rail and Road has promoted the concept of ‘Health and Safety by Design’ to encourage duty holders to choose equipment with intrinsic safety features, and consider the operating conditions at the earliest stages when planning the procurement of equipment. This clearly did not happen in the case of the ballast distributor that was being used at Cholmondeston. The RAIB is recommending that the industry takes effective action to ensure that its road-rail vehicles can be driven safely to and from the site of work, now and in the future.