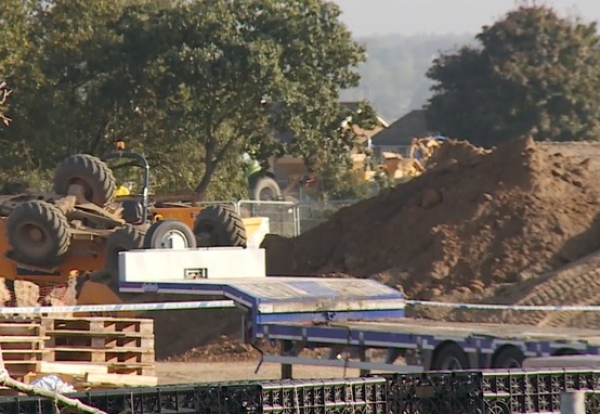 A construction worker has been killed on a Rose Builders site in Manningtree Essex the man believed to be in his thirties was killed after a dumper truck overturned, the accident happened on Monday afternoon.

Witnesses told ITV News Anglia that an air ambulance landed at the site where Rose Homes is building 150 houses.

An East of England Ambulance Service spokesman said an ambulance officer, rapid response vehicle and ambulance crew were sent alongside the air ambulance after being alerted to “an industrial accident.”

The spokesman added: “They treated a man who had suffered serious injuries and was not breathing.

“Despite their best efforts, the man sadly died at the scene.

“Our thoughts go out to his family and friends.”

Steven Rose at Rose Builders issued a statement following the tragedy, and said: “It is with great regret I can confirm that very sadly there was an accident at Summers Park, Lawford yesterday where tragically the man involved died.

“For the moment all our thoughts are with the man’s family.”

“The site is closed down pending an HSE Investigation and we are assisting the authorities with their investigation.

The Heath and Safety Executive (HSE) confirmed its inspectors were on site this morning and were working alongside Essex Police as part of its investigation.

Essex Police confirmed that the man who had died was from Clacton aged in his 30, adding “Any witnesses who were at the scene who have not already been spoken to by police are asked to contact Colchester CID on Essex Police 101.”

Police confirmed that a man in his 30s from Clacton was pronounced dead at the scene.