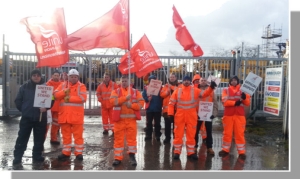 Today’s (1 February) rock solid strike action by crane operators at the UK’s largest mobile crane hire firm, Ainscough, has caused a near total shutdown of operations with less than 10 of the company’s 500 cranes leaving its 30 depots (excluding the 30 cranes operating on NAECI* projects) according to Unite.

Unite, the country’s biggest union, which represents 500 crane operators and support staff members, has confirmed that pickets have been out in force today at the company’s 30 UK-wide depots, from Plymouth to Falkirk, in an ongoing pay dispute.

The Unite members voted overwhelmingly for strike action with 90 per cent voting in favour on an 83 per cent turnout to reject the company’s pitiful two year pay deal. Over 90 per cent voted for action short of strike.

Today’s strike action is the first in a series of escalating actions planned over the coming weeks through to 23 March. A programme of overtime bans started on 30 January and will end on 20 March.

The union also now fears that its efforts to bring peace to the dispute will be soured by Ainscough’s attempts to introduce zero hours contracts to this safety critical industry, undermining the existing collective agreement.

Unite national officer for construction Bernard McAulay, said: “Our members are highly skilled professionals, operating cranes on some of the UK’s largest construction projects, including the Forth Road Bridge, aircraft carriers in Rosyth and UK-wide rail infrastructure projects.

“Ainscough has been sent a clear warning today by the workforce. Our members demand fair treatment for their hard work. The company needs to get back to the negotiating table ready to reach an amicable settlement to resolve this long running dispute.

“However we fear that the drive to lower pay for the workforce won’t stop with this pay offer.  We are extremely concerned that Ainscough is now drawing up plans to rip up the industry-wide agreement by introducing zero hours contracts for a pool of workers.

“These workers will then be on hire and fire contracts reducing them to a disposable workforce.  This will have serious safety implications for what is already one of the most dangerous industries in the country.

“This makes an utter mockery of Ainscough’s motto ‘safety before profit’, but it will also put the company at risk of winning future public works contracts in Scotland where Unite is working hard to ensure that the government there sticks to its promise to ensure zero hours working is not normal practice.”

Story and photos  from UNITE