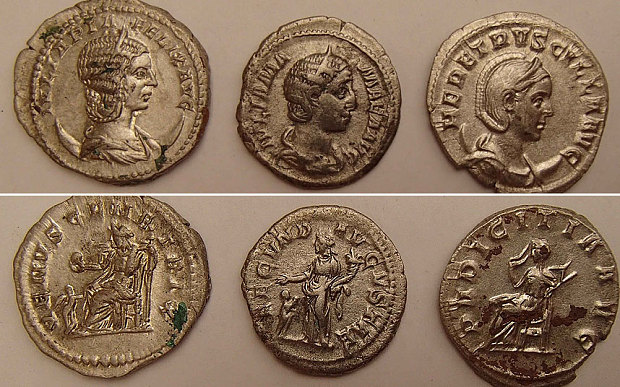 Digger driver found 3,339 Roman coins and gets to keep share

Mark Copsey , 44, found the rare coins leveling a hockey pitch and has now been told is entitled to a third of their worth after they were declared treasure under the Treasure Act.

The excavator driver who found and dug up 3,000 rare Roman coins that he put in a carrier bag not knowing what they were.Colleges calimed that it was a team find but coroner Tony Williams ruled at the hearing in Taunton in Somerset that Mr Copsey alone was the finder

Mr Copsey found out today that he can keep his share, an inquest has ruled he will now be entitled to a third of their value.

Mark was levelling a recreation ground for a hockey pitch when he spotted something in the soil that looked like a pot.

Once the find was reported found a collection of 3,339 silver coins carrying depictions of an elephant and a hippopotamus buried around 270AD were verified to be real .

Mr Copsey, from Clare, Suffolk, put the coins in a carrier bag and then telephoned local museums from the worksite to find out who to report the discovery to.

In written evidence he said: “I was stripping subsoil to the rock and was on an eight by ten metres strip to clear the second-to-final strip when I looked behind me and noticed a green colour in the soil.

“I stopped my machine and got out and investigated and discovered a broken pot with some sort of coins.”

Speaking after the hearing he said finding the coins was “brilliant.”

He added; “When I found the hoard I did everything I could to act correctly and do everything above board.

“When I’m driving it’s a health and safety rule to look behind me as well, that’s how I spotted them.

“The ‘dozer took the top off the pot before I knew it was there, I’m afraid it’ll do that every time.

“I’m still working on archaeological digs with the ‘dozers so hopefully I might find some more.”

South West Heritage Trust was informed about the find and Steve Minnitt and  Steve Membury, the trust’s senior historic environment officer, immediately went to the site.

The coins were sent to the British Museum of analysis and the experts established that the coins were from the 2nd-3rd centuries AD, with four brass sestertii,164 being dinarii, (ok) and the rest radiates.

The museum’s laboratory found that some coins had been stacked and carefully bound in textile, and string, some of which remained.

Some of the coins carried the heads of empresses, and others emperors, including Philip I, born in Syria of a Syrian father, around 204AD.

The coins are is currently still at the British Museum.