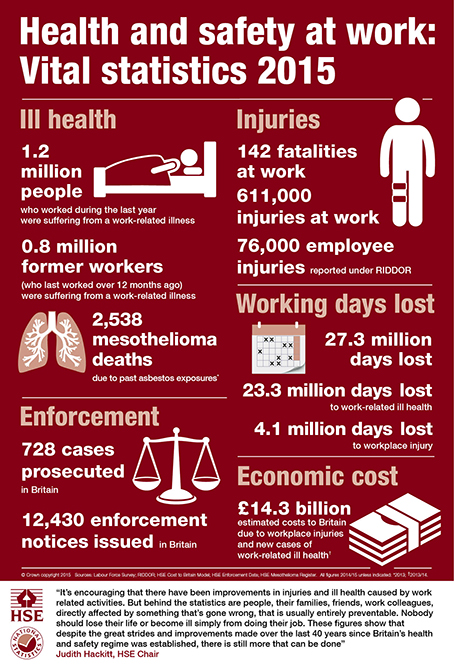 More than a million people are being made ill by their work, costing society £14.3 billion, according to new figures published today.

Despite Britain remaining one of the safest places to work in Europe, injury and ill-health statistics released by the Health and Safety Executive show that an estimated 27.3 million working days were lost due to work related ill health or injury in 2014/15.

In the same year 142 workers were killed, and there were 611,000 injuries in the workplace.

Of the estimated 1.2 million people who suffered from a work related illness, 516,000 were new cases.

This is the view of HSE’s Chair Judith Hackitt: “It’s encouraging that there have been improvements in injuries and ill health caused by work related activities. But behind the statistics are people, their families, friends, work colleagues, directly affected by something that’s gone wrong, that is usually entirely preventable. Nobody should lose their life or become ill simply from doing their job. These figures show that despite the great strides and improvements made over the last 40 years since Britain’s health and safety regime was established, there is still more that can be done”.