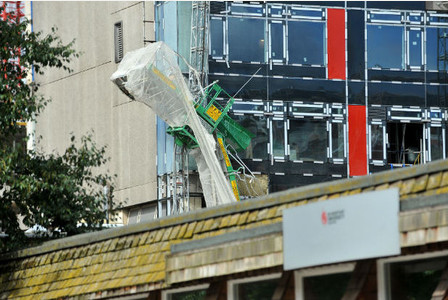 Workers hanging from their lives after lift fails

Two construction workers were left hanging on for their lives from an eighth floor ledge when a lift came away from the exterior of De Montfort University on Monday  this is the same site that a man was seriously injured a month ago from falling down a lift shaft which is run by Balfour Beatty.

The construction opperatives had a lucky escape and were unhurt during the incident at Balfour’s £42m new Faculty of Art, Design and Humanities building at De Montfort University on Monday.

A witness who was at the scene told the Leicester Mercury the workers where working on the lift while it was open.

He said “The lift was going up and one part of it came away from the wall.

“The lift runs on two runners, part of the runner snapped off the wall and fell down. The lift was swinging in mid-air.”

He added that a large chunk of it also then fell on to a van below.

“The two guys in it were hanging on the window ledge as the rest plummeted down and landed below.

“I felt pure fear thinking are they going to be okay?

“At that point we were all ushered away as we did not know whether the rest would come down.”

A spokesman from Balfour Beatty said: “We are investigating an incident on our De Montfort construction site on Monday afternoon.

“While no-one was hurt as a result of the incident, we are working closely with the HSE and are assisting them with their enquiries to learn the causes and plan appropriate action.

“The safety of the public and our workforce is always our primary concern.”