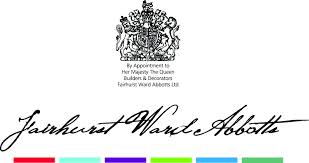 Fairhurst Ward Abbots has gone into administration the specialist historic building restoration contractor was established back in 1941 and holds the royal warrant for building and decorating services to Her Majesty the Queen and more than 200 staff are understood to have lost their jobs.

Fairhurst Ward Abbots who had built up a good reputation for delivering development, renovation and refurbishment of historic, and culturally significant properties including the National Galley, the V&A and Chatsworth House.

Kevin Brush bought ex-surveyor bought a majority stake in 2006 when the firm was turning over £10m turnover and drove the company into a large expansion as managing director and growth was projected to raise turnover from around £51m to over £80m.

The company had  148 directly employed craftspeople and tradesman along with a further 100 administrators and staff their website has been taken down following the redundancies   .

The firm recently won trade magazine awards for its restoration of Bletchley Park near MIlton Keynes , the famous home of the Second World War’s Enigma code-breakers and  recently completed the £2.5m restoration of Hoxton Hall, one of Britain’s few surviving Victorian music halls.