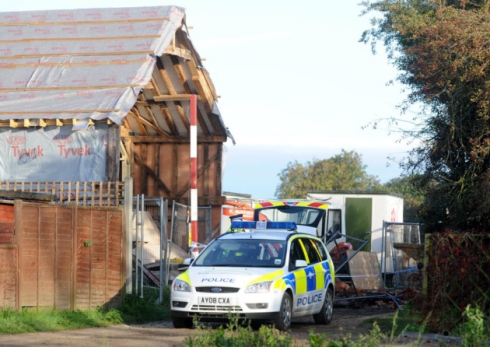 An inquest has begun into the events that lead to two ground workers who dies in a wall collapse at a barn renovation at the The Old Maltings building which was owned by building company Elliston Steady & Hawes.

On the afternoon of October 21 the two men had been working alone on the site for owner Elliston Steady & Hawes when the east gable wall of the building fell away from the rest of the structure.

The men were advised to dig a trench to underpin the wall with concrete by the structural engineer in two sections it is believed that the men were told to do this in stages but attempted to do the excavation in one go this contributed to the structure becoming unstable.

A 11-strong jury was sworn in at the inquest, held at IP-City Centre in Ipswich town center for the evidence to be heard.

A video was shown to help the members of the jury to understand the terms used in the building industry and also showed a reconstruction  of the wall collapse and the events leading up to the men’s deaths.

The video explained how the wall  had slipped into a trench that the men had dug inside the building and then toppled towards Mr Ruffles and Mr Skeet, in the afternoon it is believed that the site manager had left the site for the men to continue the work, and that around 4.30-pm the neighbors heard a crashing sound and reported the indecent to the emergency services .

The inquest heard how the Maltings building was under renovation and the foundations were not deep enough to satisfy modern regulations the groundworkers were employed to underpin the gable end wall.

Peter Dean Senior who was the coroner for Suffolk read out information from the post-mortem examination reports for both men.

Mr Ruffles described as having died from multiple injuries, including to his head and chest, with several ribs fractured and was found  not to be under the influence of any drugs or alcohol and there was no evidence of significant natural disease which could have contributed to his death.

The post-mortem examination of Mr Skeet’s body also found he was not under the influence of drink or drugs and no evidence of natural disease was found.

He also suffered multiple injuries, again to his head and chest, as well as significant internal injuries to the left side of his body including a collapsed lung.

Members of both Mr Ruffles and Mr Skeet’s families were present at the inquest, which is expected to last for around two weeks.