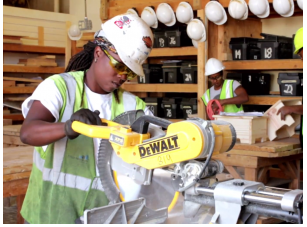 The team at www.constructaquote.com polled a total of 874 construction company owners and employers who had at least ten years’ experience, as well as a further 503 female workers currently employed within the construction industry. All respondents from each of the groups were aged 18 or over, and currently work full-time within the United Kingdom.

Construction employers were initially asked if they currently employ any women in construction roles within their businesses, with just 22% revealing that they do so. Of the remaining 78% of employers, the majority (63%) said that they would welcome female workers within their companies, whilst 38% admitted that they would be cautious of how employing a female would differ to employing males, but would nonetheless give a woman a job were she the best candidate for a position.

When all employers where then asked ‘have you noticed an increase in the amount of females showing an interest in, applying for or securing jobs at your company within the past year?’ the vast majority of respondents (76%) stated that this was true.

Next, the group of female construction employees were asked if they’d ever felt prejudice or discriminated against since deciding on their careers, with almost two thirds (64%) admitting that they had done. When then asked if they had witnessed a noticeable increase in the amount of fellow females looking for work within the industry, the majority (62%) agreed.

In a bid to understand the reasons behind the recent surge in the amount of women interested in construction roles and trades, researchers asked female employees to choose the biggest incentive(s) behind their decisions to enter their careers from a list provided. The most popular reasons emerged as follows:

Lyndon Wood, CEO and creator of constructaquote.com, made the following comments regarding the research’s findings.

“As with many traditionally male-dominated professions, there is still a widely accepted assumption that jobs in construction are just not meant for females. Quite frankly, I couldn’t agree less with this stereotype, and would actively encourage any young women tempted by a career in the industry to go for it and change the opinions of those around you by excelling in your chosen trade. Our findings certainly show that positive steps are already being made and, hopefully as more and more women secure good jobs in the industry, the more socially recognised it will become.”

“With the widely reported recent findings suggesting that there is a shortage of skills needed in the UK construction industry, it surely makes sense for employers and industry leaders to start actively encouraging women to start careers in such trades as plumbing, carpentry and painting and decorating in order to boost the industry in years to come.”