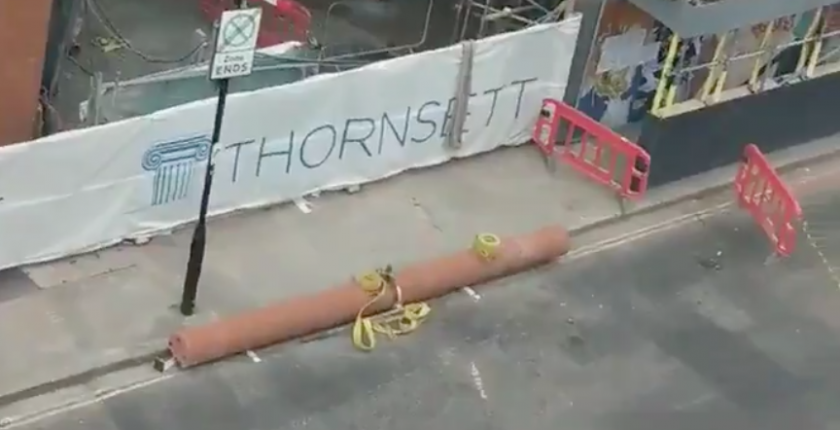 No-one was injured in the incident which is now being investigated by the HSE.

The top floor gap left by the fallen column and damage to scaffolding it caused on the way down. Picture courtesy of Twitter/Ruth Lester @mctav81

The site will be home to the Hackney New Primary School with 68 apartments contained in the tower above.

Developer Thornsett Structures Limited said: “We confirm there was an incident this afternoon at our 333 Kingsland Rd site – no one was injured.

“This involved one of our specialist subcontractors. Incident reported to Health and Safety Executives and a detailed investigation will be carried out.”

Eye witness commented Kapil Gupta telling the Hackney Gazette: “It was like some kind of a crash, and I looked out and there was this pillar covering the road.

“There were five or six cars at the junction, and one of them belonged to a lady who was quite traumatised.

“All the other cars drove off at the traffic light, but she stayed there, probably for about half an hour.

“It looked like she was shaking and there was someone from the building site by her side and calming her down.

“She stood outside the car for a while, and then one of the guys from the building site asked her to go back into the car. There were a few security people from the site talking to her and making sure she was ok.

“There was a big dent in the road but they have patched it up now.”