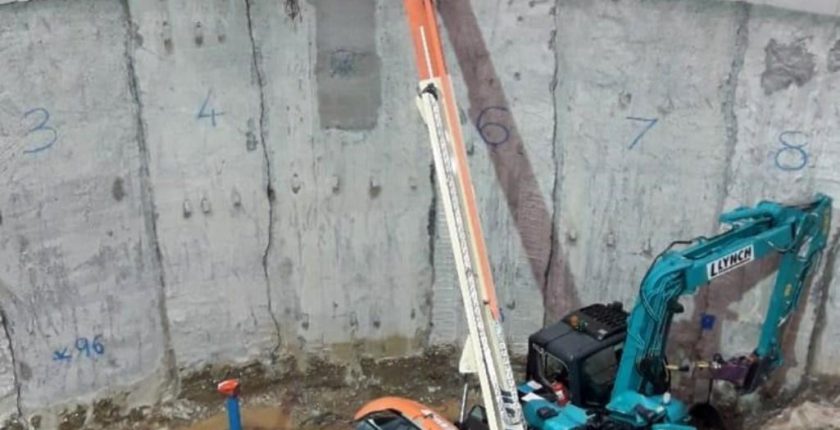 Mini digger lands on cherry picker while being lowered in shaft

A digger has landed on a cherry picker while being loaded into a shaft at the Tideway site in Greenwich the mini excavator was dropped down a shaft landing on an occupied boom lift in London, UK earlier this week.

The incident occurred in Greenwich one of 24 sites in the city along a new 25km sewer tunnel and pumping station two men were working from a JLG crawler mounted boom lift at the bottom of the shaft, when another crew decided to lower the excavator into the shaft at the same time. We have been told that the procedure for lowering equipment into the hole, usually involves a purpose built drive on drive off stillage, but in this case the machine was lifted with a set of slings slung through the top of the rubber tracks, which then broke apart during the descent, dropping the machine onto the boom lift.

If you look closely at the image you can see the broken tracks lying alongside the machine,

One said: “The two injured were working on the cherry picker down the shaft which was a write-off.

“They were lucky not to be killed in an accident like that.”

The Greenwich site is part of the Tideway east section where a joint venture of Costain, Vinci and Bachy Soletanche are main contractors.

A Tideway spokesperson said: “We can confirm that there was an incident during a lifting operation at our site in Greenwich on the evening of 22 May.

“Two members of our team were taken to hospital and have since been discharged. Fortunately there were no serious injuries.

“Safety is our top priority and we are now investigating the cause of the incident.”