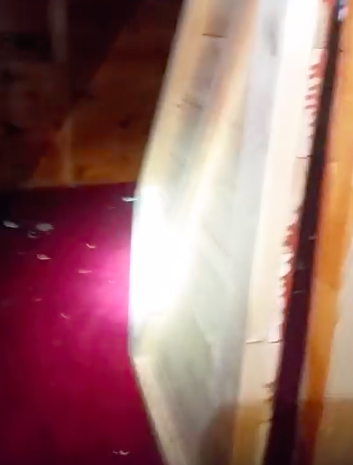 A construction worker was renovating a house has filmed the moment he found a secret room hidden above the garage.

The contractor found the room swapping an air-conditioning system in a house in Florida USA.

After an initial inspection of the ducting system he noticed a vent leading somewhere so followed it this is where he made the discovery.

He said: ““I pushed on the wall revealing a secret room. Leading to the secret room was a carpeted walkway.

“When the secret room’s door was closed it didn’t even look like it was there.”

The secret room had a carpeted floor, stained wood wall, air vents, electric outlets, and even a makeshift toilet.

The room looked like it had been used as there were empty pizza boxes and car licence plates on the wall.

“There was a very grim feeling about the place,” he said.

After posting the video online the contractor said he was and told the house allegedly used to belong to Dee Dee Moore, infamously known as ‘The Lottery Killer’.

Moore was convicted in 2012 of killing $38 million lotto winner Abraham Shakespeare by shooting him in the chest and then burying him in the backyard under a slab of cement.

The worker also said that other people later informed him that the licence plates that were hanging on the wall belonged to Moore but this claim is yet to be confirmed.

“I’m not sure what the secret room was used for, but if I had to guess, I would guess it was from hiding out from the police,” he said.